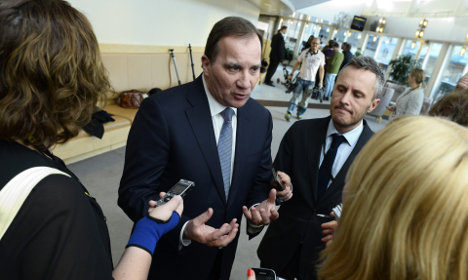 Sweden's Prime Minister Stefan Löfven on Wednesday. Photo: TT
The Sweden Democrats (SD) wreaked political havoc in December when the party brought down the centre-left government's budget over the issue of immigration, with a snap election only averted by a last-ditch deal with the centre-right opposition.
"The Sweden Democrats chose a quarrelsome strategy in the budget vote that they are now continuing. At the same time they have burned many bridges," political scientist Henrik Oscarsson at Gothenburg University told news agency AFP.
The deal between the opposition and Loefven's government – struck late December – undermined the Sweden Democrats kingmaker role by ensuring that even minority budgets will be passed until 2022. Acting Sweden Democrat leader Mattias Karlsson. Photo: TT
The Sweden Democrats – which more than doubled its seats in September's elections, winning 13 percent of the vote – said in December it would vote against any budget that does not cut immigration to Sweden.
However the party was not expected to gain enough support in parliament to pass the no-confidence motion.
Sweden is expected to receive a record number of between 80,000 and 105,000 asylum seekers this year.
The far-right party – Sweden's third largest – rose in opinion polls after striking down the minority budget and which almost caused a new election.
"He (Löfven) has broken a number of important promises and above all denied the Swedish people the opportunity to have their say," Sweden Democrats acting leader Mattias Karlsson told news agency TT on Wednesday.
Prime Minister Löfven said on Wednesday that the far-right party was using "parliament as its own playhouse".
How the Sweden Democrats went mainstream
According to Oscarsson, SD's disruptive approach to parliament has made it more of a single-issue party than previously.
"But parties who profile themselves in single areas run the risk of others stepping in and positioning themselves, in this case on immigration and refugee issues," Oscarsson said.
The Sweden Democrats hoped the country's largest right-wing opposition party, the Moderates, would support the vote of no confidence, but in parliament Wednesday its leader Anna Kinberg Batra distanced herself from
them, calling the party "extreme".
Five consequences of Sweden's cancelled vote
A survey ordered by public broadcaster SVT showed in late December that a majority of opposition voters wanted their parties to cooperate with the Sweden Democrats.
Nonetheless, SD's no-confidence vote would fall well short of a majority in parliament even if all Moderate Party members voted in favour of it.
While other Nordic countries have seen anti-immigration parties enter the political mainstream, Sweden's political parties have drawn a firm line between those who want to curb immigration and those who don't, Oscarsson said.
"In Sweden's case there is a deep ideological conflict surrounding this issue," he said.
"The Moderates are trying to tie migration issues to integration, exclusion from society and job policies. If we can just solve the problem of giving people work, integration will sort itself out, goes their argument," Oscarsson
added.