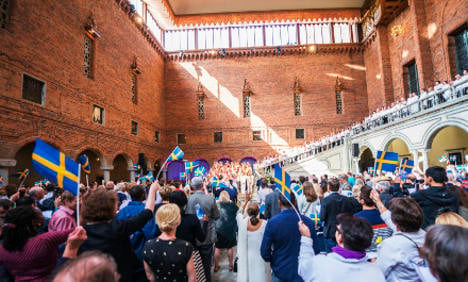 There are (probably) more homeless people in Sweden than you think

There’s no commonly agreed way to calculate homelessness and every country uses a different measure. In Sweden the official figure given by the National Board of Health and Welfare includes lots of people who don’t have a permanent home but aren’t living in shelters or on the streets. For instance, Sweden includes people set to be released from jail within three months and have nowhere to go.

In Sweden’s latest survey, from 2011, 34,000 people were homeless, or 0.36 percent of the population. Of these, 4,500 were classed as being in an “acute” situation, meaning they lived on the streets or in shelters. However, homeless charity Stockholms Stadsmission says that the real figure is much higher than this, claiming among other things that the figure of 370 homeless EU migrants (mostly from Romania and Bulgaria) is too low. Overall homelessness has risen since the last survey in 2005, but new ways of measuring means it’s hard to say by how much.

SEE ALSO: Eight countries in stats: from Spain to Sweden

The number of working-age people in Sweden living on some kind of welfare increased in 2013 to 818,900, or 14.7 percent of the population aged 20-64. This figure was higher than in 2011 and 2012, but much lower than in previous years: in 2004, 20.1 percent lived on benefits; in 1996, straight after Sweden’s financial crisis, the figure was 22.6 percent. The figure includes people on unemployment benefits, sick benefits and those in government work programmes.

Sweden’s strong economic performance in recent years might have helped get people off benefits, but stricter benefit rules and stronger tax incentives to work introduced by Fredrik Reinfeldt’s former centre-right government between 2006 and 2014 also played a part.

Swedes’ earnings are on the up

It’s getting more unequal faster than anywhere else

Sweden was among the most equal countries in the OECD, but it’s less equal than it used to be.  Income equality is measured by the ‘Gini coefficient’; Sweden has a Gini of 0.27; a score of 0 means everyone has the same income. The US is on 0.38. Overall, Sweden has the 7th most equal incomes in the rich-country group, behind 6th placed Belgium and ahead of 8th placed Finland.

Not a bad performance from Sweden, but what’s really interesting is that inequality has risen faster in Sweden than anywhere else in the past two decades.

There are 41 percent more immigrants

2 million people have a foreign background, if you include everyone who was born abroad or born in Sweden to two foreign-born parents. This was up slightly on 2012, but up by more than 600,000, or 43 percent, since 2003.

Crime: what happened to the car thieves?

Some categories of violent crime have risen over time: the number of assaults fell 8 percent in 2013 compared to 2012, but had risen overall by 20 percent since 2004. The number of reported rapes fell by 5 percent between 2012 and 2013, but rose fourfold between 2004 and 2013. However, much of this increase is explained by more sexual assaults being classed as rape and a greater willingness by women to report rape.

Sweden leads Europe in the percentage of women in work. 77.2 percent of women in Sweden have jobs, according to data from Eurostat, more than in any other European country. However, there’s more to the story: Swedish women are more likely to work part-time than the European average, and their incomes continue to lag behind men’s: according to Statistics Sweden, in 2012 they earned only 86 percent of what men earned.

The birthrate is higher than most places – but still too low

Statisticians say that the average woman needs to give birth to 2.1 babies in her lifetime for the overall population not to shrink (before migration is accounted for). By this measure, Sweden’s birthrate of 1.91 in 2012 is too low. This despite Sweden’s generous parental leave, subsidised daycare and equality between the sexes.

You’re less likely to die of cancer in Sweden

If you live in Sweden, you’re statistically less likely to die of cancer than in the vast majority of European countries, with just over 92 deaths per 100,000 people.

And this isn’t just down to good genes – among Swedes’ fellow Scandinavians in Denmark the death rate is 125 per 100,000. Swedes’ lower consumption of alcohol, red meat and cigarettes perhaps plays a part here, although there’s room for improvement: Iceland, Malta, Cyprus and Finland do better.

Swedes are the marrying (and divorcing) kind Swedes have a reputation for being relaxed about living together outside marriage. So it might come as something of a surprise to learn that Swedes are more likely than the Germans, French, Brits, Danes or Italians to tie the knot. In 2012, 5.3 marriages were celebrated per 1,000 inhabitants in Sweden. In the EU, only Romanians, Latvians and Cypriots were keener on getting hitched (although the Turks, at 8 marriages per 1,000, beat the lot). However, the rate is lower than in 1960, when the 6.7 Swedes per 1,000 got married.

DISCRIMINATION
‘No such thing as race’: why Sweden’s colour-blind approach is failing
EMPLOYMENT
Have your say: How worried are you about losing your job in Sweden?
Url copied to clipboard!