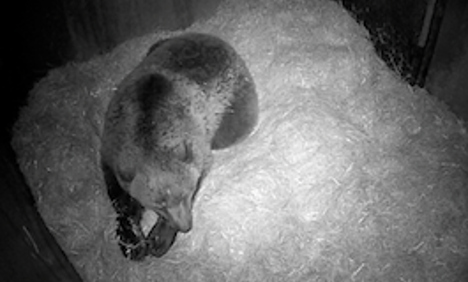 A screenshot of Järvzoo's live feed. Photo: Järvzoo
A live feed from Järvzoo's European brown bear's enclosure was launched on Christmas Day, with the aim of finding out more about the animals' behaviour between December and April, when they spend most of their time asleep.
Broadcasting for 24 hours a day, the video stream caught the moment when the only female bear in the enclosure gave birth to three cubs on Thursday.
Jens Larsson, who is the director of the zoo, told The Local that 100,000 people had watched the video stream over the last seven days, and that he expected many more to be tuning in this week to see how the cubs were developing.
"When they are born they look like rats, but we expect them to change a bit in the next few months. Mostly they will be staying close to their mother who will be breastfeeding them, and they will be cuddling up to her to keep warm."
"We think a lot of people will be watching them, especially now people are starting to talk about what we are doing in the media," he added.
European brown bears – which are also found in the wild in northern Sweden – hibernate for several months during the winter. The adult animals do not eat, drink, pee or poo for several months.
"They sleep inside a kind of nest for most of the time and they just sit up once in a while to change position…The whole body and the digestive system is shut down. It is really an incredible solution by nature to help them through the winter months when they don't want to be out looking for food," Larsson told The Local.

The video is being broadcast on local media sites in central Sweden.

Jonas Wahlstrom, who works for one of the sites, Helahälsingsland.se told Swedish newspaper Svenska Dagbladet: "Now people really get to see how small bear cubs are when they are born…this will be a part of popular education".

Scandinavia has previously caught the world's attention with other so-called 'slow TV' projects. Norwegian broadcaster NRK has shown live streams including a fire burning, a train journey from Oslo to Bergen and a five hour knitting marathon.
Asked if the sleeping bear feed was designed to tap into the trend, zoo director Jens Larsson said:
"Not really. I think it is more that it is popular because of the love of nature in Sweden. We hear from our visitors that many people are interested in the bears and for half the year there is usually a big question mark over what is going on in their enclosure during winter time. Now our visitors and other members of the public can watch this all online."