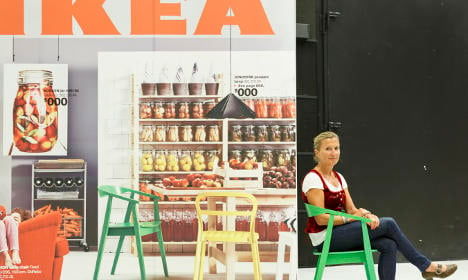 An Ikea employee with the company's 2014 catalogue. Photo:TT

Both children were removed uninjured after they became caught between the mattress and the crib frame, IKEA and the Consumer Product Safety Commission (CPSC) said.

Ikea urged consumers to check for a possible gap between the mattress and the frame.

"Ikea Vyssa crib mattresses are designed to be used with Ikea cribs to ensure a snug and safe sleeping environment for infants and young children,” the firm said on its website.

"A gap between mattress and crib ends can pose an entrapment hazard for an infant."

The company said five Vyssa crib models sold in the United States between August 2010 and May 2014 were recalled, including those branded Vackert, Vinka, Spelevink, Sloa and Slummer.

The CPSC urged anyone with these models to stop using the mattress if there was a gap larger than two fingers' width between the mattress and the frame.”

Customers should immediately stop using the recalled mattresses and return it to any Ikea store for an exchange or a full refund," the agency said.

In September, the furniture giant recalled 20,000 child's swings from stores around the world after saying they posed a risk of serious injury.