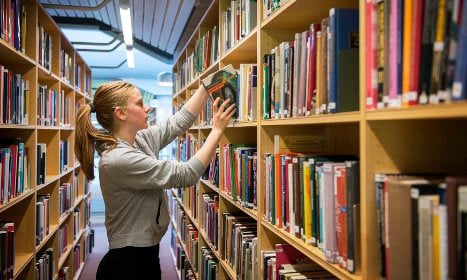 A mere 13 percent of the people mentioned in four major Swedish history textbooks on the national curriculum are women, according to an investigation by Swedish newspaper Dagens Nyheter (DN).

The percentage is even lower in chapters focusing on the twentieth century, the study found.

In the history textbook ‘Impuls Historia’, which is published by major Swedish publisher Natur & Kultur, just 32 people mentioned in the book are women – out of a total of 324 names.

There are sections on German Field Marshal Rommel and UK General Montgomery. But there is no mention of US Civil Rights icon Rosa Parks or UK Prime Minister Margaret Thatcher.

In another textbook, ‘SO Historia’, aimed at 15-year-olds, there are only four women mentioned in the final section, two of which are merely mentioned in captions.

Svante Norrhem, a historian at Lund University, told The Local that he was cross but unsurprised by the findings.

“This is known among historians. The problem is that it doesn’t matter what historians say or the reactions are – nothing changes. Hopefully the publishers will take notice this time.”

The idea that women are not an important part of history is simply outdated, claims Norrhem, who is the author of a book on women’s history.

“In the 1980's the focus was still very much on men and men’s history. But in the last 25-30 years there has been so much gender history and women’s history so today we know a lot more about women. Not just important women but women in general,” he says.

While he acknowledges that women may not have played such a big role in political history, Norrhem thinks that the history books need to broaden their perspective.

“History is not just politics. History is also daily life, giving birth, getting married, having a family, falling ill, losing people, losing children or your spouse.”

History professor Ann-Sofie Őhlander, who carried out a similar investigation on behalf of the Swedish government in 2010, described the results of the investigation as “shocking”.

“This is outrageous from a democratic perspective,” she told DN.

She added that there was a risk that young girls would become less interested in history because of the lack of female figures.

Swedish publisher Liber said that it was aware of the problem.

“The goal is to make things as equal as possible,” publisher Thomas Johansson told DN. “But it’s tricky – we have to sift away so much in history books. They tend to stick to the standard story, which contains mostly men.”