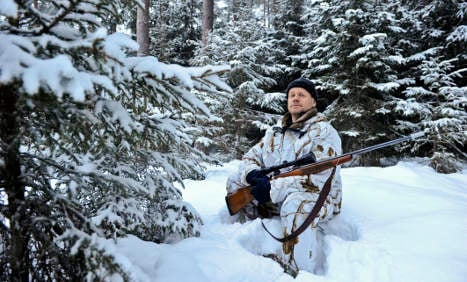 The seasonal wolf hunt had been stopped at the last minute by a lower court but will go ahead after a Gothenburg appeals court lifted the ban on Thursday.

"It's a good thing that we will finally get going with managing the wolf pack in the way that our parliament has decided," Torbjörn Lövbom of the Swedish Hunters Association told news agency AFP.

Activists said that by the time the case heard by a higher court, this season's hunt for 36 wolves — nearly 10 percent of the Swedish pack — will have already ended.

"Even if we win the case in the end, there is a great risk that the wolves will be dead by that point," said Oscar Alarik, a legal counsel with the Swedish Nature Conservation Society, which expects the Swedish hunting policy
will eventually be put before an EU court.

But Lövbom responded: "People far removed  from reality should not decide how life should be organised for those who are directly affected."

Sweden's former centre-right government believed wolves had become too invasive in some areas and called for the population was to be reduced.
But the current coalition of Social Democrats and Greens is divided between an agricultural minister who favours hunting and his environmental counterpart, who opposes it.
Wolves are social animals that usually move and hunt in packs. There are believed to be around 370 wolves in Sweden, with most of them living in the far north of the country.