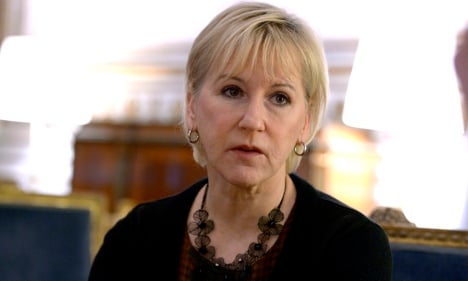 Wallström has been the Swedish Minister for Foreign Affairs since October 2014. Photo: TT
She told Dagens Nyheter that the overall Israeli reaction to Sweden's recognition of the State of Palestine had been expected, but that Israel's latest comments were unacceptable.
"They have a rhetoric that crosses all lines," she said.
"It is not acceptable the way they talked about us… It has angered not only us but also the Americans and everyone else who is dealing with them right now. They are using a very harsh and unforgiving tone."
Earlier in January, the Swedish Foreign Ministry cited "scheduling issues" for cancelling her trip to Israel.
But an Israeli government source suggested this week that the visit had not gone ahead because Israeli officials had refused to meet with the Swedish minister.
“The Swedish foreign minister would not have received any official meetings in Israel if she’d travelled here,” Emmanuel Nachshon, a spokesperson for the Isreali Ministry of Foreign Affairs told Sveriges Radio.
“It is no secret that Israel sees Sweden's recognition of the state of Palestine as an extremely unfriendly act,” he added, confirming that Wallström would not have been able to meet with Foreign Minister Avigdor Lieberman or Prime Minister Benjamin Netanyahu if she had visited Israel.
Sweden's decision to recognize the state of Palestine in late October caused Israel to recall its ambassador to Stockholm, who returned a month later.
On Friday, Middle East expert Per Jonsson from the Institute of International Affairs in Stockholm told Swedish broadcaster SVT that denying a welcome to a country's foreign minister was a direct affront.
Sweden's cancelled Israel trip stirs debate
Margot Wallström, however, told Dagens Nyheter: "Sweden has good contacts with Israel and I look forward to making a visit later."
"I am for Israel. I am for Palestine. I am for peace," she added.
"That is why we do this. We must ensure that we get a two-state solution while it is still possible."
But she also emphasized that she felt Israel had been "extremely aggressive" in its language.
"Israel has continued its settlement policy, continued with its demolitions, continued with its policy of occupation."