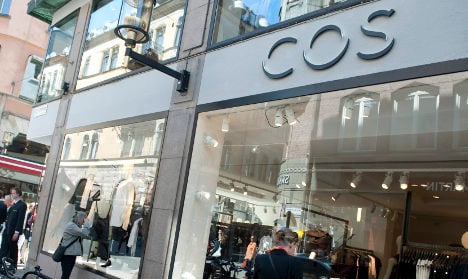 Cos is one Swedish fashion brand doing well abroad. Photo: TT
Sales for the Swedish fashion industry amounted to 237 billion kronor in 2013, with exports accounting for 62 percent of that, figures released by the Association of Swedish Fashion Brands (ASFB) revealed on Monday.
"Many of our Swedish fashion brands are well established in Sweden and have a rather sober view of how much growth there can be here. They look increasingly outside Sweden, and while e-commerce is increasing, that opens up the global market," Emma Ohlson from the group told Swedish newspaper Svenska Dagbladet.
The success of Sweden's fashion industry abroad contrasts with a dip of 0.2 percent across the country's export industry.
"We offer accessible designs and we deliver very affordable products," Maj-La Pizzelli, founder of the shoe company ATP Atelier, one Swedish brand that is becoming increasingly popular abroad told the newspaper.
"You first need to succeed in your home market in order to succeed in your export market," she added.
Other Swedish clothing companies that are performing well include Acne, Cheap Monday, Filippa K and Björn Borg, alongside Swedish superbrand H&M, which also owns Cos and & Other Stories.
Despite what appears to be a growing appetite for Swedish fashion abroad, it is too soon to predict the industry's total export figures for 2014.
But according to Emma Ohlson, a "double-digit" percentage increase is possible — something that she says the fashion industry would be "very happy with".
Stockholm Fashion week is set to take place next week, with both major and emerging brands showcasing pieces from their autumn/winter collections.