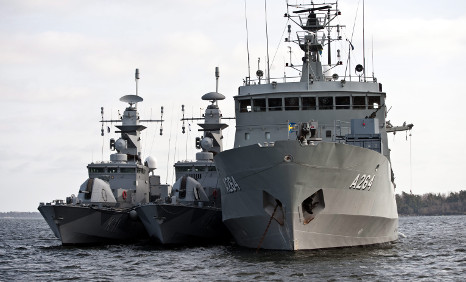 HMS Malmö ship on a previous mission. Photo: TT
Robin Klameth says he was out on his own boat when he spotted the top of a submarine near Stavsnäs in the Stockholm archipelago.
"I had to stop, otherwise I would have collided with it," he told Swedish newspaper Dagens Nyheter (DN).
Last week it emerged that Sweden's HMS Malmö ship was secretly deployed to comb the waters between Lidingö and Nacka, about three kilometres from Stockholm's city centre and close to busy ferry lanes, after the suspected sighting on October 31st.
This was just days after Swedish armed forces called off the search for another suspected submarine first reported on October 16th – a sighting that sparked the biggest military operation in Sweden in decades alongside global media interest.
Philip Simon, head of press for the Swedish Armed Forces, confirmed earlier last week that the second submarine sighting had been registered.
On Monday, witness Klameth gave more details to DN, describing the submarine as "about 20 metres long" and saying that he was so close to the vessel he could almost touch it.
"It was an awe-inspiring sight. I was not exactly eager to go forward and tap on it, so I kept at a distance," he told the paper.
After turning back towards Stavnäs to collect a colleague and a mobile phone, he returned to the same spot to find there was "no trace of the submarine".
He later contacted the Swedish authorities, claiming they interrogated him for several hours.
"They wanted to know everything: the weather, the winds, the landscape, how the water was moving. Several times, I told them in detail what I had seen."
Dagens Nyheter describes the witness as a calm man who grew up in the archipelago, knows the waters well and is an expert on boats.
Asked by the newspaper if he ever doubted that it was a submarine that he saw in Swedish waters that day, he responded:
"I have lived all my life out here and have never seen anything like it".
While the Swedish military has described his observation as "credible", it has not been officially classified as a confirmed sighting.
According to a poll released on Sunday by the Swedish Civil Contingencies agency, Swedish concern about Russia has risen sharply following the two submarine sightings in October, with 73 percent of Swedes expressing worries about developments in the country in 2014, up from 45 percent in 2013.