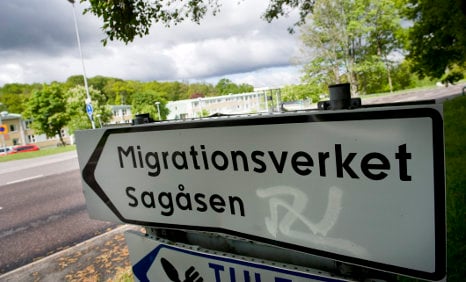 A sign pointing to a branch of Sweden's Migration Agency. Photo: TT

Sweden’s Migration Agency (Migrationsverket) says that the number of unaccompanied children arriving during the first two weeks of the year matches the number that came throughout the whole of January 2014.

Last year, 7049 children came to Sweden and sought asylum without a parent, guardian or older sibling – an increase of more than 80 percent on 2013. Sweden’s Refugee Agency had predicted that around 4100 children would arrive.

Most of the refugees are fleeing violence in Syria and Eritrea.

On Tuesday, Ronny Magnusson from Sweden’s Migration Agency told Swedish broadcaster SVT that it was “difficult” to make predictions for the year ahead and stressed that no matter now many children arrived, they would all be looked after.

“We have to take care of them….County administrative boards are negotiating with local authorities to increase the number of places for these children,” he added.

Sweden has one of the most liberal refugee policies in Europe, with 50,235 people seeking asylum there in the past three years.

Sweden currently takes in more refugees per capita than any other European country and the Swedish government has pledged 1,200 resettlement places.

All of Sweden’s major political parties support the continued acceptance of large numbers of refugees, with the exception of the nationalist anti-immigration Sweden Democrat party, which won 13 percent of the vote in the last general election in September 2014.

A survey of 1,500 Swedes by polling service Novus in the same month as the election showed 34 percent were in favour of receiving fewer refugees, while 28 percent wanted more, and 32 percent considered the current level appropriate.