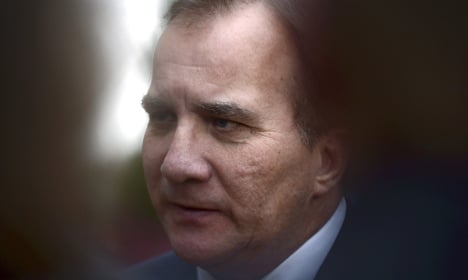 Stefan Löfven remains the Swedish prime minister. Photo: TT
Only 45 members voted in favor of the no-confidence motion, a far cry from the minimum of 175 votes that were required to get it passed.
That the motion would be rejected in parliament was highly expected, with all parties already announcing that they did not intend to support the Sweden Democrat-led (SD) idea. The anti-immigration Sweden Democrats became Sweden's third largest party after scoring almost 13 percent of the vote in the country's September 2014 elections.
How the Sweden Democrats went mainstream
Sweden's government later abandoned plans to hold a snap election in March 2015, after crisis talks between Social Democrat Prime Minister Löfven and the nation's four centre-right parties known as the Alliance.
But the unlikely passing of the no-confidence vote could have seen Löfven removed from his post of prime minister.
The Sweden Democrats (SD) proposed the vote earlier this month, arguing that the country's political situation was too fragile to continue with the status quo and saying that Sweden's Social Democrat Prime Minister Stefan Löfven would not be able to gather enough votes in parliament to move his policies forward.
Five consequences of Sweden's cancelled vote
The government has in its short time "produced a string of defeats", SD member of parliament Richard Jomshof told Swedish media prior to the vote.
Addressing the nationalist party's concerns on Swedish immigration policies, he added that he believed that the government's budget was severely underfunded because it was based on inaccurate estimates on the costs of refugees and migration.
"Trust is not something you get, it's something you deserve," said Jomshof to Swedish broadcaster SVT.
Members of Sweden's centre-right Alliance parties abstained from the no-confidence vote, as did the Left Party.