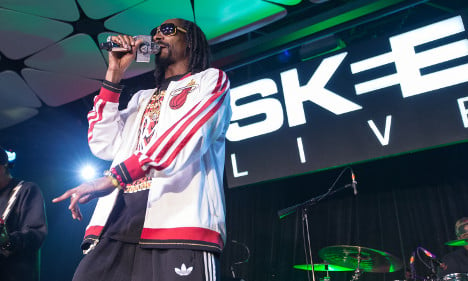 After requesting three luxury Mercedes cars to take him and his entourage to the Nöjesfabriken venue, Snoop performed hits to an audience of around 1500.

Karlstad, has a population of less than 90,000 and is best known globally as the product name of one of Ikea’s bestselling sofas. It was the first time that the artist had performed there.

As well as a solid cast, that's a solid sofa from @DesignByIKEA The Karlstad! Classic choice. #StarWars pic.twitter.com/ATBCGcsQCP

Many locals took to Twitter to express their surprise that he had selected their small city.

"Snoop in Karlstad on a Monday night, 200 metres from my apartment?!," wrote one in Swedish.

"Why in hell's name is Snoop Dogg in Karlstad tonight?" said another.

Other tweeters questioned why the star was not performing in Gothenburg or Stockholm, while some also raised eyebrows about Snoop’s liberal attitude towards drugs.

"Good luck to the region's drug police," said one fan on Twitter.

The rapper has previously been banned from entering countries including Norway, Australia and the UK for either possessing or being under the influence of drugs.

Martin Hygård, a spokesperson for the venue told Sweden’s Metro newspaper that he would “work in cooperation with the police and municipality” to prevent drug use at the concert.

On Tuesday morning it emerged that 16 people had been arrested on suspicion of minor drug offences at the gig and three others were asked to leave the premises because they were too drunk.

Kerry Jörmar from CN Radio, a local music station in Karlstad told Swedish broadcaster that it “meant a lot” to the city that Snoop Dogg had performed there, describing him as “one of the big heavy names since a long, long time back.”