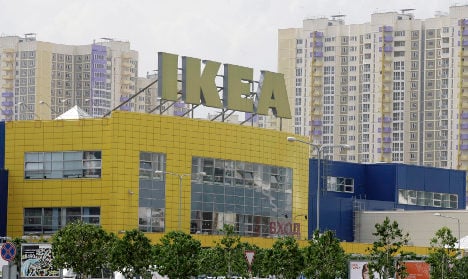 The company briefly suspended kitchen furniture and appliance sales in Russia as the ruble tumbled late last year, unleashing a spending spree as consumers snapped up products before prices on imported goods soared.

Sanctions and the collapse of the price of oil are now expected to push Russia's economy into a sharp contraction this year with a timid recovery in 2016, but Ikea said its plans to invest two billion euros ($2.3 billion) in the country by 2020 were unchanged.

"We have a long-term plan for Russia. We hope to follow it but we are monitoring the situation closely," Ikea Group spokeswoman Martina Smedberg told news agency AFP.

The budget home furnishings chain said it was too early to say how Russia's turbulent economy would affect it in the long term.

The Russian market has become Ikea's fourth largest by sales since the company arrived in 2000. The retailer plans to open its 15th store in the country in 2018.

Closely-held Ikea, still managed from Älmhult, the Swedish town where it was founded, is scouting locations in 25 Russian cities "with a population of over 500,000," spokeswoman Daniela Rogosic told Swedish daily Dagens Nyheter.