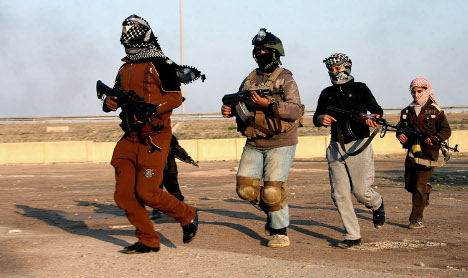 Men believed to be fighting for Isis in Iraq. Photo: TT/uncredited
The move followed an interview that Säpo's head Anders Thornberg gave to Swedish daily Dagens Nyheter on Saturday, in which he said that the security service was working hard to control fighters who had returned to Sweden and could "perhaps" be prepared to carry out terror attacks on home soil.
Thornberg has previously cited anecdotal evidence which suggests that up to 300 Swedes have joined Isis (also known as the Islamic State) and said he also stood by this figure.
"We have seen an increasing number of young Swedes travelling to Syria where they go and get training in training camps, they learn to become terrorists, handle explosives, handle weapons," he told the TT news agency on Wednesday.
He also said that the number of confirmed cases of Swedes fighting alongside extremists was rising rapidly, saying the newly released figure of 100 was up from 92 cases a week ago.
Sweden's Social Democrat justice minister Morgan Johansson said this week that the government was planning to draft a bill that criminalized Swedes who participated in training with or fighting for groups classified as terror organisations by the UN.
But others have warned that a law could be counterproductive.
"It could of course lead to people feeling that: If I cannot wage jihad in Syria, I will wage jihad in Sweden. Unfortunately, I think that it could spark many fires that otherwise would not have been sparked," Tomas Lindstrand, chief prosecutor for terror investigations in Sweden told TT recently.
Another question raised by critics is whether preventing Swedes from going to Syria or Iraq could create legal uncertainty and stigmatize Muslims.
"Those are legitimate concerns. The public already associates terror with Muslims, not least because of the overwhelming news from trouble spots where atrocious acts of violence and terror crimes are committed," Elvir Gigovic, chairman of the umbrella organization the Swedish Muslim Council, told TT.
He added that it was important to improve "dialogue" between different groups affected by the rise in Swedes deciding to join Isis.
Säpo's warning about Swedish fighters came as Stockholm-based newspaper Aftonbladet interviewed a man from Gothenburg, who said that Europe should fear fresh terror attacks.
"He who plays with fire gets burnt," the man known only as Abraham told the newspaper.
Abraham – who is well educated and in his thirties – said he had recently returned from the front line in Aleppo, Syria, to his home city, describing his period abroad as the best time of his life.
According to human rights group Amnesty International, Isis is attempting to carry out "systematic ethnic cleansing in northern Iraq". It has already committed countless war crimes including mass killings and kidnappings in both Iraq and Syria.
Amnesty estimates that boys as young as twelve have been recruited by the extremist group.