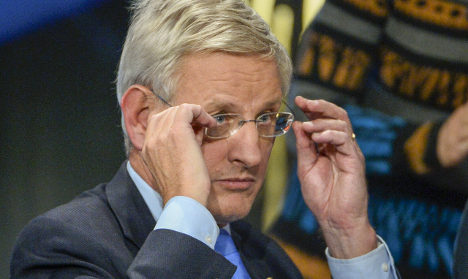 Former Swedish Foreign Minister Carl Bildt who was on the plane. Photo: TT
The story was broken by Norway's Ambassador to Sweden Kai Eide, who tweeted about the incident on Wednesday.
He wrote that Carl Bildt – a Moderate party politician who played a key role in former Prime Minister Fredrik Reinfeldt's government – had been involved in a "secret mission" that took place "under cover of darkness" to help the student who had been sentenced to death in Afghanistan.

The ex-Foreign Minister himself later gave more details to Sweden's Expressen newspaper, describing how he felt "very nervous" during the operation, in which the student was helped on to a Swedish government plane, without the knowledge of nearby Afghan security forces.
The student, Sayed Pervez Kambaksh, 25, was also a journalist for the daily newspaper New World. He had downloaded a report on women's rights from the internet and ended up being arrested in 2007. He was later beaten, taken to prison, and sentenced to death for questioning Islam.
His case became well known internationally, with numerous human rights campaigners and politicians calling for his release, including the former US Secretary of State, Condoleezza Rice, and Britain's former Foreign Secretary, David Miliband.
Following international pressure, the student's sentence was reduced to twenty years in prison and he was later secretly pardoned and released, but many feared that his life was still at risk as he was sought by extremists.
Carl Bildt told Expressen on Thursday that he had spoken about the young man with the former Afghan President Hamid Karzai on several occasions and decided to conduct a covert operation to help him flee the country, together with Kai Eide.
The pair helped Sayed Pervez Kambaksh to flee Afghanistan in 2009 by helping him get access to a Swedish government plane, on which Carl Bildt was waiting.
Norway's Foreign Minister Jonas Gahr Støre is also understood to have been involved in the plan, alongside Afghan officials that Bildt told Expressen it was still "too dangerous" to name.
Kambaksh was flown to Oslo and is now understood to be in the US.
Bildt told Expressen that the successful operation had been kept secret for six years to avoid "political convulsions" between Sweden, Afghanistan and the United Nations and to protect any Afghan officials suspected of being part of the operation.
He said that there was less risk now that both Afghanistan and Sweden had new governments.
Ashraf Ghani was sworn in as Afghanistan's president in September 2014, following months of debate and violence over who won the country's last general election.
Carl Bildt didn't respond to The Local's request for a comment, but did retweet a link to our news story.

Great media interest in Sweden in tweet by @kai_eide on rescuing student in Afghanistan in 2009.http://t.co/c60OAS2qv2