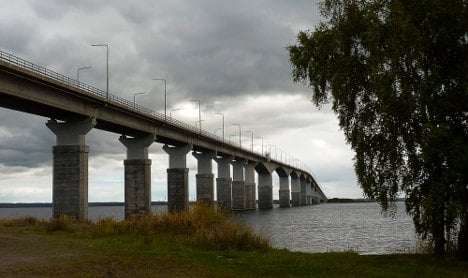 The Öland bridge, linking the island to the mainland. Photo: TT

Bomb specialists disposed of the object at midnight on Thursday, it has emerged.

Calle Persson, a press spokesperson for the police, said that it was a type of grenade, about forty centimetres long.

He added that it was “quite similar to earlier pieces that floated ashore on Gotland”, a larger island further north of Öland.

Persson told the TT news agency that there had also been “talks of Russian flares” in the area recently but admitted that he did not know if they had been spotted at the time the grenade was discovered.

The grenade was spotted by a passer-by on Wednesday afternoon, on a beach near Långlöt on the east coast of the island.

Sweden’s national bomb squad was called to the island after seeing photos of the object.

“The danger is over,” Persson said to TT.

The incident comes amid fears of a growing Russian military presence in the Baltic Sea.

In September 2014 two SU-24 fighter-bombers allegedly entered Swedish airspace in what the former Foreign Minister Carl Bildt called "the most serious aerial incursion by the Russians" in almost a decade.

The following month a foreign submarine was spotted in Swedish waters, although the Swedish military was unable to determine where it came from. Earlier this month a second 'secret' submarine hunt was also reported.

“I think that there is a new security situation in the Baltic area and in the Baltic Sea,” Sweden’s Defence Minister Peter Hultqvist told The Local on the day the first sighting was confirmed.

“We see more exercises, we see more intelligence activities…we are in another situation.”

“The Swedes are for the first time seriously scared. Frightened of Russia, of what they are up to," Foreign Minister Margot Wallström added in a separate interview with Swedish newspaper Svenska Dagbladet.