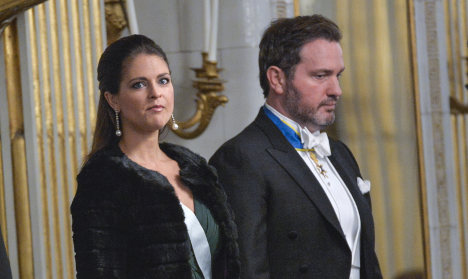 Princess Madeleine and Chris O'Neill in December 2014. Photo: TT
According to documents leaked to Swedish newspaper Expressen and German celebrity magazine Bunte, Chris O'Neill has not paid property taxes on the New York apartment he bought in 2013.
This is not the apartment that the couple were most recently living in (which was a rental property), but is in the same building, according to Expressen.
The pair temporarily returned to Sweden in December, choosing to settle there while they decide about where in Europe to base themselves in the future. Princess Madeleine is set to give birth to her second child later this year and told Swedish media in 2014 that she no longer wanted to live so far away from her relatives in Stockholm.
Who is Chris O'Neill?
Expressen said that if the apartment the couple owns in Manhattan was a joint private investment, Princess Madeleine is also liable for the missed taxes.
"We at the court do not comment on Chris O'Neill's private affairs…the apartment in New York is a private investment that has nothing to do with the princess's official duties," the Swedish Royal Court's chief press officer Margereta Thorgren told the newspaper.
The Local was unable to reach Margereta Thorgren on Thursday.
Expressen also claims that Chris O'Neill has tax debts in Florida, where he owns a summer house.
Gary Jakelow, a tax expert in New York, noted that the missing money was a relatively small amount for the wealthy couple and told Expressen:
"There is no reason not to pay their property taxes. But when dealing with so little money, it sounds more like someone has forgotten."
But according to reports in Bunte and Expressen, O'Neill also has outstanding tax debts in New York dating back to 2010. These are apparently equivalent to 65,000 kronor and the media claim that he has been issued with a warrant from New York State, suggesting that it could seize some of his assets if he does not pay the monies owed.
The couple are currently living in an apartment owned by Sweden's royal family in central Stockholm.
IN PICTURES: Princess Madeleine through the years
Url copied to clipboard!