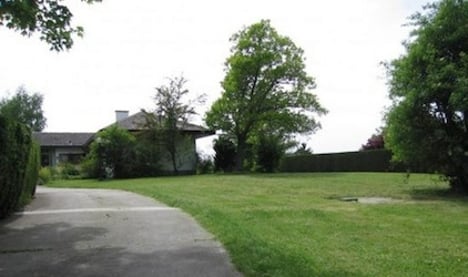 A shot of the apparently run-down property. Photo: Immoscout24
Kamprad, 88, moved back to Sweden last year after living in Switzerland for almost four decades.
The house in Epalinges, a suburb north of Lausanne, has frequently been described as modest for a man whose fortune is conservatively valued by Forbes magazine at more than $4 billion and by some estimates up to nine times that.
IN PICTURES: Who are Sweden's richest one percent?
The flatpack furniture empire founder has carved out a reputation for being frugal, but Swiss media were astonished to discover that his home is too run down to live in.
“Current house to demolish,” reads an advert for the property carried on the Immoscout24 real estate website.
The property is comprised of a 4,150-square-metre flat parcel of land benefiting from a clear view of Lake Geneva, privacy and a quiet neighbourhood, according to the ad.
It is currently a single-storey ranch-style villa with attached garage, surrounded by large swaths of grass, dotted with a few trees and not much sign of professional landscaping.
Immoscout24 said it was possible to build eight new homes to replace the villa.
The asking price? Four million francs ($4.6 million).