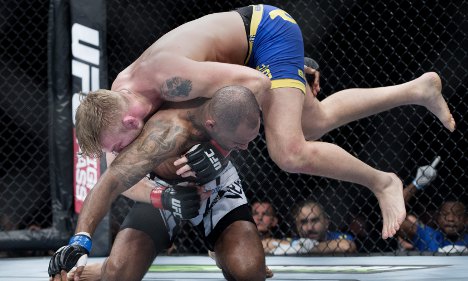 Alexander Gustafsson meets Jimi Manuwa in a previous UFC Fight Night in London. Photo: TT
If you're already familiar with Ultimate Fighting Championship (UFC), this sport needs little introduction. But if not, welcome to the largest mixed martial arts (MMA) league in the world, comprising some of the planet's top-ranked fighters.
The massive event at Tele2 Arena on January 24th is set to attract an international audience, with tourists from the United States, the UK, Norway, Finland, and other countries flocking to Sweden to see their countrymen step into the Octagon. The championship is on course to sell out, with 25,000 tickets already snapped up.
The Nordic favourite in the contest is Swedish MMA star Alexander “The Mauler” Gustafsson, who will fight the US's Anthony “Rumble” Johnson in his fight for the title belt. The winner of the fight will later meet the reigning champion in light heavyweight. He is expected to take advantage of the massive support from his home audience.

Alexander Gustafsson (right) facing off with Anthony Johnson on Wednesday. Photo: TT
Here's what David Allen, the UFC's senior vice president and general manager for Europe, Middle East, and Africa told us about the competition.
The UFC has held fights in Stockholm before – what makes this time different?
This is the 4th time the UFC is in Stockholm, including when we were here last October. In the past, our events here have brought in about 12,000-14,000 people. This is the first time that we are using a stadium in Stockholm, as opposed to arenas, which is what we've done in the past – and this time we will have an excess of 25,000-26,000 in the audience. That completely changes the significance of the event – this is the first time the UFC is in Stockholm with an event of this size and magnitude. One billion households will be able to view this event from 147 countries around the world [on television] as well. The Tele2 Arena in Stockholm undergoes transformation ahead of Saturday's event. Photo: UFC
What can you tell us about the fighters?
We have 28 fighters, and it's a really international event this year, with fighters from 12 different countries coming in. We've got three Swedish fighters – including the main fight with Alex [Gustafsson]. The other two Swedes are Akira Corassani [who competes in the featherweight category] and Nico Musoke [from the Welterweight division]. Overall within the UFC, we have eight Swedish fighters, six who fought here in October, and for this event we have those three on the roster. They're garnering a lot of local support. Other fights for Saturday are [American] Dan Henderson and [Dutch] Gegard Mousasi [who competes in the Middleweight division]. That will be a super fight, as well as Phil Davis and Ryan Bader, the night's third fight.
What kind of audience is expected to attend?
The amazing thing for this event is we have ticket sales from 44 countries around the world – so there are people traveling from around the world to come to Sweden. Sweden dominated tickets sales, with US second, UK third and then we've got a collection of Brazil, Japan, Germany, Denmark, Finland, and just everywhere else in the world. Normally these events tend to be very localized, you would get 95 percent from local buyers, but this year, it is truly an international event. All the Scandinavian countries are supporting the event in a real way.
Who will the crowd be rooting for?
I think there's a big support for Alex of course, he's the man, he's a hometown boy, and now he's got the possibility for the title and very, very narrow loss. He's ready and he's fit and he's ready to go. They are ranked number one and three in their division. So it's not a walk in the park for either of the two, it'll be a great fight.
What else can people expect on Saturday night?
You can expect the biggest and most energetic night the city has ever seen. This is one of those events you want to be able to say "I was there," five years, ten years from now. And if you weren't, you'll be saying "I wish I was there". You really have to be there to see it.
Url copied to clipboard!