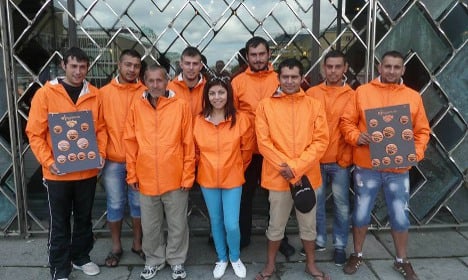 Members of the Ejtiggare team, including Rosie (centre) and Staffan (right). Photo: Ejtiggare
A group of long persecuted individuals, who centuries ago migrated from the far east toward Europe, the Roma community has only recently started spreading rapidly on the north of the continent.
And many Swedes have had a hard time both understanding and coping with the unfamiliar sight of increasing numbers of Roma beggars asking for money on the streets of their socialist cities.
The surge in Roma people in Sweden began around two years ago. Rising numbers seeking to escape poverty and discrimination in their own birth nations (predominantly Romania and Bulgaria) started spending days travelling by road across Europe before ending up in what they hoped would be Scandinavian safe haven. Members of the Roma community have been an increasingly visible sight in Sweden. Photo: TT
While numbers are hard to track, it is estimated that about 1,000 entered Sweden last year.
As EU migrants, they have the right to visit Sweden as EU tourists under the right to Freedom of Movement, without the need for a visa or a work permit.
After speedbumps over the last several months in addressing the issue, Sweden's Ministry of Social Affairs held talks on January 23rd in Stockholm with its Romanian counterpart to try to come up with lasting solutions.
Sweden and Romania to discuss begging surge
Meanwhile, on the ground, the debate roars and one couple from Gothenburg has decided to try to make a difference on their own.
Rosie and Staffan Erixon first launched their campaign 'Ejtiggare' (which translates to 'Not beggars') to try to alter perceptions of the EU migrants.
"We want to try to get people to be more open minded and try to understand the situation," Rosie Erixon told The Local on Thursday.
"Some people really don't know how to deal with the phenomenon."
The breakthrough initiative, first launched last August in Gothenburg, and running in Ronneby, south of Sweden since last week, has the Roma migrants – alongside other economically disadvantaged individuals – selling buttons (also known as pins or badges in some English-speaking countries).
Each badge displays the initiative's name alongside other positive messages and slogans, and cost 20 kronor each.
The aim, said Erixon, is to help change perceptions while assisting the beggars, who she insists want to work.
"We thought to ourselves, it's just not possible in a country like Sweden, where we are so far ahead in so many different ways, that we have not come up with a way to help these people," she added.
"So we said let's do something and not just talk about it. And that's what we did."
"If you give people responsibilities, they take them – they work," Erixon told The Local. "In Sweden, we have been treating them as beggars instead of individuals, as human beings – calling them beggars instead of people."
Between two to three hundred workers have been selling the buttons, with a highly successful public reaction, according to her husband Steffan Erixon.
"It has been going very well, in Gothenburg and now in Ronneby," he said.
"We have received so many requests from people across the country who want to get involved, but we are keen that this moves forward the right way, in a sustainable way, so we are careful about just taking donations. We want to make a lasting change."
"We help people who want to take the help and want to work," he added. "And contrary to popular belief, that is the case for many of them."
'Ejtiggare' will launch a new newsletter in the spring entitled 'Situation Sweden' and its employees will be commissioned to sell it alongside the buttons.
The 'Ejtiggare' staff, donning formal orange coats, are entitled to keep half of the 20 kronor they earn per button sold, with the remaining 10 kronor put in a 'bank' to be used for additional needs of the workers.
"Many of these people had jobs previously – as chefs, nurses, in construction and so on," said Rosie.
"Others came with a limited amount of money, or promises of work here in Sweden, and those plans simply failed," she added.
Rosie noted that because the migrants carry EU passports – most commonly from Romania, Greece, or Italy, they are not entitled to the nation's free Swedish course program, SFI, unlike some non-EU citizens here on asylum grounds. This means they would have to pay for Swedish courses themselves – perhaps slowing their road to integration.
But the project is working on providing them with free Swedish courses.
"They don't have to speak, they simply greet passerbys with a card written in Swedish, explaining the project," said Rose. "The approach has really worked well. People have been fantastic."
The project she said, is also empowering a community of people who have felt scorn and resentment from the public.
"There's something about standing up which is so different than sitting down, with no eye contact , no interaction. Now they are standing, and this helps them feel human again."
Staffan echoed her thoughts:
"When they come out in an organized form with jackets and pins, they feel that people like them better. And this project has at the very least proved that they actually can by themselves decide to stand up and work."