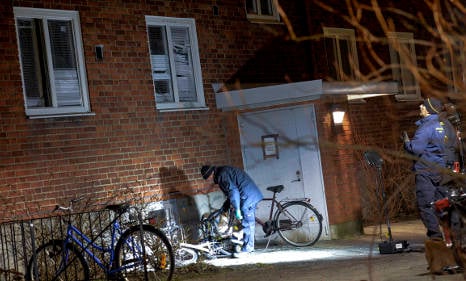 Police outside the apartment building on Friday. Photo: TT

The blast occurred at around 3:20 am.

Several windows were smashed but no one was hurt.

Police are now carrying out a forensic examination in the area.

They do not currently have any suspects and are asking for people who saw or heard the blast to come forward.

“We remain in the area and are looking for witnesses,” police spokesperson Nils Norling told Swedish news agency TT.

He added that there was no known existing threat against the people living in the property.

Malmö was shaken by a series of bombings last year, including attacks on a law court and a real estate company office in Rosengård.