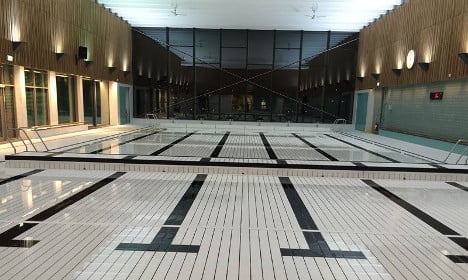 Sweden's first LGBT swimming pool. Photo: Sundbyberg Stad
The public swimming pool, which is in the suburb of Sundbyberg, has created a new changing room, designed to be used by Stockholm's gay and transgender community.
The area will also be open to disabled people who would prefer more privacy, or who want to take carers of different genders into the cubicle with them to help them change. Members of religious groups who would prefer to change without being seen by others are also welcome in the new zone.
The swimming pool will retain its other two changing areas for men and women.
"We did this because we wanted to be inclusive for everyone," Fredrik Richard, a press spokesman for the local council in Sundbyberg told The Local on Friday.
"People do not always feel comfortable visiting swimming pools and sport places and we hope this will give people more choice. This is the first sports building like this in Sweden and we are pleased we have had a lot of attention from SVT [Sweden's national public broadcaster] and major newspapers."
He said he was not aware of any other similar initiatives by local councils in Sweden or elsewhere in the world.
Sweden already has a global reputation for tolerance and gender equality and some secondary schools already include a third changing area for people who do not wish to use traditional segregated areas.
The country also recently formally recognized a new word 'hen', which is a gender-neutral pronoun that can be used to describe transgender people and others who do not wish to be classified according to their sex. 'Han' and 'hon' are the Swedish words for 'he' and 'she'.
Sundbyberg's swimming pool has been formally certified as LBGT-friendly by RFSL, Sweden's national association for lesbian, gay, bisexual and transgender people. Founded in 1950, it is one of the oldest organizations of its kind in the world.
"The most important thing is that all people who want to, are able to come here and swim," Isander Freiman from RFSL told Swedish broadcaster SVT on Thursday.
She is among those who have helped train staff at the pool, to make them better aware of the needs and concerns of the LBGT community and described the pool's opening as "an incredibly important" moment.
"I hope that the rest of Sweden will follow," she added.
"I've learned a lot myself – about how I can behave more like a human being and provide better treatment in some ways that I didn't think of before," the swimming pool's manager Mikael Eljenmyr told SVT.

Inside the swimming pool. Photo: Sundbyberg Stad
Sundbyberg has already hit the headlines in Sweden for opening an RFSL-approved library designed with Stockholm's gay and transgender community in mind.
The suburb's Social Democrat Mayor Jonas Nygren has spoken about a desire to develop even more facilities that promote diversity.
"The next step is to see how we can make our preschool, elderly care and schools…more inclusive and more open," he told SVT.
The new changing rooms will formally open to the public on Friday January 30th.