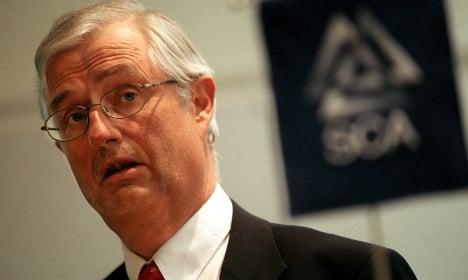 Sverker Martin-Löf is stepping down as chairman of Industrivärden. Photo: TT
You might not have heard of Industrivärden but as one of Sweden's leading investment companies, it has stakes in some of Sweden's most famous brands from Ericsson and Volvo to the construction firm Skanska, engineering company Sandvik and the country's biggest bank, Handelsbanken.
The latter is set to get a new chairman and new chief executives, as is Industrivärden, following a huge row over how both companies have been run in recent years.
Industrivärden made an official announcement about the reshuffle on January 22nd, following reports of "excessive" use of private jets and wives and children accompanying executives on foreign business trips including to the Olympic Games in London in 2012. It was also claimed that managers' families had been taken to a hunting lodge owned by a forestry and paper firm (SCA), which the investment company owns a huge chunk of.
The chairman of Industrivärden, Sverker Martin-Löf, will officially step down as chairman of Industrivärden at a company meeting this spring, and is also giving up his board seats at several companies.
For many years, he has been ranked as the single most powerful player in Swedish industry, but found himself in the limelight this winter after Swedish newspaper Svenska Dagbladet along with the site N360 published the long series of revelations about the way he did business. Industrivärden executives apparently took their families to watch the Olympic Games in London. Photo: TT
Initially dismissing the criticism as unfounded, he told Swedish financial news agency Direkt:
"It's hard to know the purpose behind accusations and what I am being exposed to."
He insisted that the trips and perks were in line with company rules and global industry standards in his sphere:
"There seems to be such incredible resources behind the accusations and the power and the ability to lie, twist information, accuse and slander," he said.
But Industrivärden later admitted it they it been "influenced by the recent debate" adding that it was reviewing past conduct at the firm as well as planning to introduce new restrictions and limits on its holding company's senior managers.
"The intention is…that the following principles shall apply in the future: Senior executives of portfolio companies shall not serve on Industrivärden's board," it said in a statement.
The scandal has made global headlines, with the Wall Street Journal calling it "one of the biggest shake-ups of corporate Sweden in decades", while The Financial Times said the country had flown into "a corporate storm" and cited company insiders speaking of a holding firm "that had at times lost touch with reality".
Industrivärden was formed in 1944 to manage shareholdings of Handelsbanken.
On Thursday it said that Anders Nyrén, who is currently chairman of the Swedish banking group Handelsbanken, would take over as its new chairman.
Pär Boman, Handelsbanken's current CEO, is in the pipeline to take over as chairman of Handelsbanken, but the confirmation will come before its spring meeting.
"An announcement on a successor to Pär Boman as CEO of Handelsbanken will be made by its board of directors prior to the bank's Annual General Meeting," said a statement.
Bengt Kjell is set to become chairman of steel maker SSAB, another company that Martin-Löf was previously chairman of.
Meanwhile, Martin-Löf has confirmed that he will not seek re-election on any of the boards the company works with.