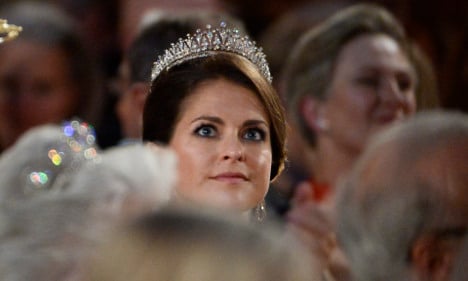 Princess Madeleine at the Nobel Prize ceremony in December 2014. Photo: TT
After Sweden's newspapers went into a frenzy this week over allegations that the couple hadn't paid tax on their apartment in New York, the Royal Courts' Chief Information Officer Margaret Thorgren said on Friday that the claims were untrue.
"Princess Madeleine is not involved in any debt, as the tax authorities made a mistake in New York," Thorgren told Sveriges Radio.
In an earlier statement, the Royal Court had said it did not want to comment on what it called "Chris O'Neill's private affairs".
IN PICTURES: Princess Madeleine through the years
Chris O'Neill, the British-American financier husband of Princess Madeleine has been accused of tax fraud by newspapers including Sweden's Expressen and German celebrity magazine Bunte. The publications claimed that he was being chased for unpaid taxes and debts of almost 350,000 kronor (US $43,000) in New York.
Margaret Thorgren's interview followed the release of a written statement from Chris O'Neill posted on the Royal Court's website late on Thursday.
"I strictly observe all tax obligations. All property taxes owed by entities related to me are in the process of being settled," it read.
Among the allegations made by European media were claims that a warrant had been issued by New York State, suggesting that it could seize some of his assets if O'Neill did not pay monies owed that dated back to 2010.
Chris O'Neill admitted the warrant's existance, but said that it had since been withdrawn.
"On 14th January 2015, the New York State Department of Taxation and Finance agreed to cancel a tax warrant after accepting that an error had been made. The information quoted in the newspapers today regarding this matter is therefore no longer valid,” he wrote.