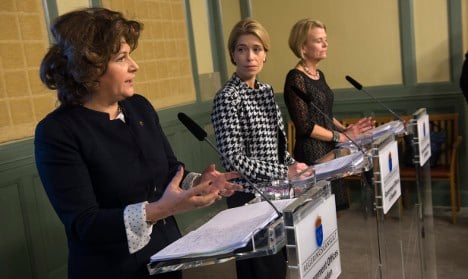 From l to r: Ministers Rovana Plumb, Annika Strandhäll and Åsa Regnér. Photo: TT
The meeting followed teething problems over the last few months as the countries attempted to coordinate efforts to tackle the recent surge in Romanian EU migrants begging in Sweden.
Talks took place between the Minister for Social Security Annika Strandhäll, the Minister for Children, the Elderly and Gender Equality, Åsa Regnér, and Rovana Plumb, who is Minister for Labour, Family, Social Protection and Elderly in Romania.
The parties agreed on a joint statement to be signed at an EU summit on March 9th.
"We will create a framework for how we will share experiences on successful measures," she said. "Local authorities in Romania and Sweden will cooperate and we will prepare projects to achieve common goals for employment and social welfare in both our countries," said Plumb.
"We have discussed the situation for EU citizens in vulnerable situations who stay temporarily in Sweden," Strandhäll echoed. "This is a common challenge and in order to meet it we are strengthening the cooperation now between Romania and Sweden."
Begging scheme seeks to button up critics
Thousands of beggars have arrived in Sweden over the past two years, with ninety percent of them travelling from Romania, according to figures released by Stockholm's Social Administration in April 2014.
Most of them are members of the Roma community – one of the EU's largest minority groups – and arrive as EU tourists under the right to Freedom of Movement. Many live in tents or caravans and make a living by asking Swedes for money outside shops and underground stations.
Romania has been criticized in recent months for encouraging Roma people to beg in Scandinavia, by failing to do enough to help Roma people living in poverty in their home nation.
When questioned about prejudice against Roma people in her country, Rovana Plumb stated: "there is no discrimination in Romania."
She argued that economic growth in her nation was benefiting the poor, noting that the minimum wage had recently risen and citing the example of a child allowance for 500,000 poor children doubling in recent years.
Plumb also highlighted a new national strategy being set out for Roma people in Romania, inviting her Swedish colleagues to study the situation on the ground in her country.
Åsa Regnér said the Ministry had seen a fresh willingness from Romania to take action and said she noted that aid money from the EU for this purpose was increasingly being spent on the issue, despite previous criticism that funding had previously been misused.
Regnér also announced that Sweden would appoint a national coordinator dedicated to dealing with the issue of Sweden's Roma community shortly. The coordinator will examine, among other things, ways that more jobs can be created for Romanian migrants.