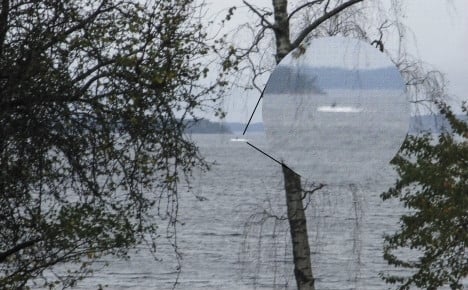 An enlarged look at the mystery sighting of a suspected submarine in the Stockholm archipelago in October. Photo: TT
The sighting of a suspected submarine on Friday October 17, and then twice again over that weekend, triggered a two-week Cold War-style submarine hunt that made news across the world.
At the start of this month, DN reported that a second suspected submarine had been spotted just a week after armed forces called off the hunt.
According to Dagens Industri's "central source", a thorough analysis of the significant amount of evidence collected over the armed forces' submarine searches now indicates there was a third, and possibly even a fourth, vessel.
“It qualifies this breach as very worrying if there are so many vessels in Swedish waters,” Allan Widman, chairman of Sweden’s parliamentary defence committee, told the paper.
"Three to four sounds like a comprehensive foreign underwater operation, if the information is correct. It seems this business is more extensive than what I thought based on the information that was given at the press conference.”
Rear Admiral Anders Grenstad told TT that the Armed Forces would not complete their assessment until March, meaning the picture of the incident given at a press conference in November remained the only official assessment.
He said it was still not certain whether the armed forces would decide to publish the completed report.
Widman pointed out that Sweden’s capability to detect submarines had declined dramatically since the submarine hunts of the 1980s and 90s, and argued that the country’s armed forces needed to expand its fleet of helicopters equipped for anti-submarine warfare.
"We should have had them in place even when the intelligence operation in the Stockholm archipelago began,” he said.
The Helikopter 14 project, which is only expected to have anti-submarine warfare capability by 2020, should be scrapped, he argued.
"That this project has gone on for thirteen years without reaching any of its goals is a nightmare for Sweden. The fastest way now I believe is not to continue the project but to make a direct purchase of a maritime operations helicopter from the US.”