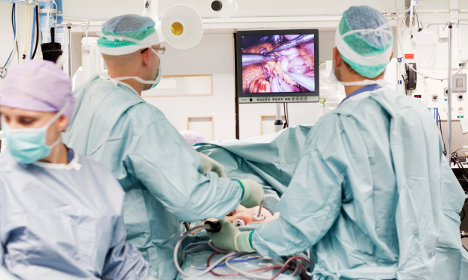 Doctors at a hospital in Sweden. Photo: Melker Dahlstrand/Image Bank Sweden
The move targets patients affected by several types of cancer in Sweden – leukaemia, brain, throat, prostate, urinary and stomach cancers.
Between them, these make up around 15,000 of the 60,000 cancer cases diagnosed each year.
The aim is to reduce the mean waiting time for patients by two thirds.
Regions that manage to achieve the goal will be awarded a 500,000 kronor bonus ($60,000).
"This is is a very important agreement," said Sweden's Healthcare Minister Gabriel Wikström at a press conference at Huddinge Hospital, just outside Stockholm.
"It is important that the time between when cancer is suspected to the start of treatment should be as short as possible. We want to spare worry and anxiety, and provide a qualitative leap in Swedish health care," added Wikström.
"Today, there are large differences across the country in how fast you come into the treatment…This, we hope to overcome."
SKL's chairman Anders Knape added: "I hope we will be able to see results by the autumn."
The plans were first presented by Gabriel Wikström last year and builds on a similar model in Denmark.
There has been a high profile debate about cancer care in Sweden in recent months, following reports of long queues for cancer treatment and complaints from leading health professionals about a lack of qualified staff in hospitals.
But while incidents of cancer are rising in Sweden, those living in the country are statistically less likely to die of cancer than in the vast majority of European countries, with just over 92 deaths per 100,000 people. Only Cyprus, Finland and Bulgaria have lower death rates, according to official EU statistics body Eurostat.