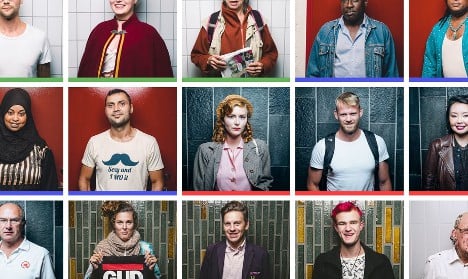 A snapshot of some of the people in Pantiel's Stockholm subway project. Photos by: Evian Pantiel
Initially, it was Stockholm's higher education system that drew Evan Pantiel from sunny California to snowy Sweden – university was still free for all international students eight years ago when Evan made the move.
It didn't take long for the now 31-year-old to fall for his host country.
And after completing his masters in education at Stockholm University, he decided to pursue work he felt he could truly enjoy.
"I guess it's very cliché, but I've always had an interest in photography," he told The Local. "And I wanted to do something I enjoy for work."
The full-time freelance photographer has since captured images from around the world, including in Ethiopia, Morocco, and Nepal, working on a variety of projects and for a variety of clients, including NGOs, PR firms, local companies in Stockholm, and the National Geographic. Evan Pantiel in October 2014 at Venice Beach, California. Photo: Evan Pantiel
Last spring, he launched a different kind of project – based on his own personal observations in Stockholm.
It centres on the city's colourful three-line subway system- and how each line seems to have its own identity.
Take a look at The Local's selection of pics from the project
"I focused on this subway project, because I find people so interesting," he said. "The diversity and differences between the lines and the social aspect of it is really fascinating to me."
"Each line has its own little flair, little style," he added.
The realization came to Evan after living in different parts of Stockholm over nearly a decade.
"I've been on both ends, and I noticed that there's a certain cultural aspect of people that ride the subway lines," he said. "The demographics for each line tend to be similar."
In this way, his Sthlm Subway Project aims to give each line a "visual representation".
Evan began photographing people last spring, and continued over the course of summer and autumn, when people tend to be less covered up in bulky winter coats. He plans to further the project once the weather warms up.
He works on the project alongside Rosanna, his Swedish partner, whom approaches strangers to explain what they're doing, speaking in her mother tongue.
"This approach has been more effective," Evan explained, adding that while he estimates that about 85 percent of people he has encountered in Sweden speak English, he feels that speaking to people in their native tongue is always preferable.
"I pick people that I see that I find interesting," he said. "But it's a lot of work. A lot of the time people don't want [to talk], mainly because they're in a rush to get someplace. People have things to do throughout their day, they don't have time to stop."
Evan described his favourite – and most challenging – tunnelbana stations.
"I love going to Hornstull because everyone is super friendly, everyone has such a unique personality and appearance, and anyone you ask is super enthusiastic about participating," he said.
"Further out on the blue line, there are more recent immigrants, and many don't speak English or Swedish," he said. "It's therefore more difficult to properly explain what I'm doing, there's a communication problem. I think a lot more of the people would love to participate more though if they could properly understand."
He added that senior citizens are also more difficult to convince, and he has also encountered a certain amount of suspicion among Swedes in general.
"They sometimes think you're trying to sell them something, or ask for money."
Read more expat career features here
Despite not being fluent in Swedish, this is where Evan is now hoping to make his permanent home, despite the more favourable weather conditions back in California.
"This is pretty much home," he said. "After eight years, my friends back home have mostly married and have families and so on, although many are now also divorcing," he joked.
A subway project would also likely be a lot less interesting, he said with a laugh.
"It would probably not go down that well – because public transportation is basically non-existent in California."