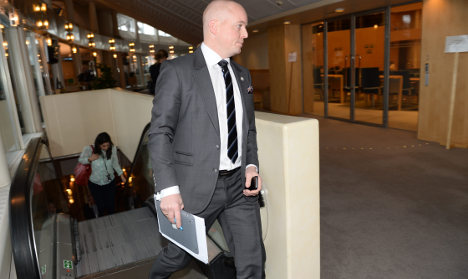 Björn Söder is walking away from his role as party secretary. Photo: TT
Björn Söder announced last year that he intended to step down from his post in 2015, but kept postponing the move and most recently said he planned to exit the position in March or April.
However, in recent weeks rumours have been swirling in the Swedish media, suggesting that he was being encouraged to make a rapid exit, following a string of questionable comments.
Most recently, Söder questioned how "peaceful" Islam is, following the Paris terror shootings.
"Björn announced he was going to resign some time ago," insisted Sweden Democrat press spokesperson Henrik Vinge to The Local last week.
"The question has only been when it's going to occur. Because of different circumstances, notably the election and Jimmy's absence [the party's leader Jimmie Åkesson is currently on sick leave] that change has been postponed several times. But the idea has been discussed for over a year now."
On Monday the party announced that Richard Jomshof, 43, was set to take over from Björn Söder on February 26th. Jomshof has been a member of parliament for the Sweden Democrats since 2010 and is based in Helsingborg in southern Sweden. He is a former teacher. Richard Jomshof, the new party secretary for the Sweden Democrats. Photo: TT
"The question on the submission of the party secretarial role has been up for discussion and I am pleased that we have now reached a compromise," said the party's acting leader Mattias Karlsson in a written statement.
Björn Söder did not appear to be entirely happy with the idea, telling the TT news agency that he would have preferred to stick around until March or April, but that other party officials had viewed this as "too far in advance". Instead, he will stay in his role for a "transition period" of another month.
He insisted that there were no major disagreements between himself and the party other than over the timing of his exit.
But in their press statement, the Sweden Democrats noted that the Party Secretary's role had become more focused on "communication and less on administration" in recent months, which some political commentators suggested was a hint that the nationalists were not entirely comfortable with his public persona.
The Sweden Democrats are the third largest political party in Sweden, after scoring around 13 percent of the vote in the last general election in September 2014.