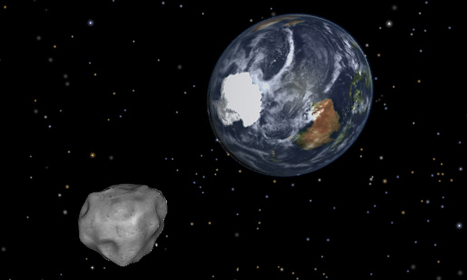 An impression of an asteroid passing earth. Source: TT
The asteroid, which has been named 2004 BL86 is estimated to have a diametre of more than 500 metres.
"It will look as if a star is moving and it is quite big compared to other asteroids, so it will be worth looking," Claes-Ingvar Lagerkvist, professor of astronomy at Uppsala University told The Local.
"There will not be another like this for 12 years."
But he warned that cloudy weather meant that the spectacle may not be as visible as many astronomers had hoped.
"You will probably need a telescope – at least a small one," he added.
While news stories about the asteroid were among the most read across Swedish news sites on Monday, according to media trends website SocialNyheter, Lagerkvist said he did not think that Swedes were especially more interested in outer space than their Nordic neighbours.
"I'm not so sure we are that different," he laughed.
"This is something you will be able to see in a lot of northern Europe this week."
According to Lagerkvist, the peak time to spot the asteroid from Sweden is between 6:00pm and 7:00pm on Monday night. It may also be visible tomorrow evening at around the same time.
"Tomorrow you might have a better chance, depending on the weather," said Lagerkvist.
Nasa scientists meanwhile are embracing the opportunity to study the asteroid up close.

“While it poses no threat to Earth in the foreseeable future, it’s a relatively close pass by a relatively large asteroid, so it provides us a unique opportunity to observe and learn more,” said Don Yeomans, the recently retired manager of Nasa’s jet propulsion laboratory in a news release.

Nasa will take snapshots of the object as it flies past the earth, using radar and microwave radiation.

Its spokespeople have been more optimistic about our chances of catching a glimpse, suggesting it may be possible with simple binoculars.