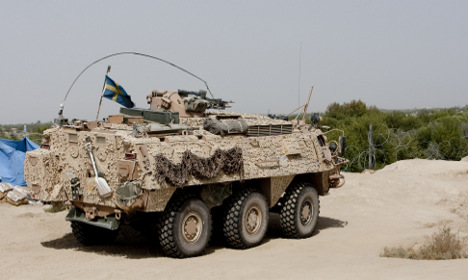 Photo: TT
Fredrik Brandberg's comments originally appeared as his Facebook status on Sunday afternoon before spreading across Swedish media.
Writing in both English and Swedish, he questioned his future situation upon returning to Sweden, including options for work.
"In a few months, I'm back in Sweden after being deployed in Afghanistan, against Talibans and others who have really jeopardizing development in this very sore country," he said.
"There is no permanent job waiting for me when I come home."
The officer, who is currently headquartered in Kabul on his third mission to Afghanistan then compares his situation to that of returning ISIS-fighters from Syria, noting recent calls from several Swedish government representatives who have argued that extremists should be given more help to re-integrate upon returning to Sweden.
The Swedish soldier addresses Mona Sahlin in particular, a former leader of the Social Democrat party who is now Sweden's official coordinator against violent extremism.
"I read that Mona Sahlin together with other Swedish political leaders are anxious to take care of Swedish IS-warriors coming home from being involved in Syria, with specially designed programs for work and other issues that would make them function well in our society."
Brandberg refers to his post as "Utmaningen" or, "The Challenge".
"It would be wonderful if I was met with a comparable program after my homecoming, after which I could feel safe in having a regular job, with monthly income and a social stable situation in the society where I wouldn't need to wonder whether I'm wanted or not," he argued.
Until December 31st, there were approximately 500 Swedish soldiers in Afghanistan as part of the International Security Assistance Force (ISAF) NATO-led security mission in Afghanistan. That number was reduced dramatically on January 1st when the ISAF mission ended and was replaced by the NATO-led Afghanistan Resolute Support (RS), which focuses on training, advising, and assisting various Afghan organizations.
A spokesperson for the Swedish Armed Forces told The Local on Monday that what happens to soldiers upon their return from war was not an issue that fell under its mandate.
On Wednesday, Swedish Armed Forces Head of Press Philip Simon clarified that the Swedish Armed Forces does "take care of their soldiers" upon their return to Sweden.
He added that while finding them work does not fall under its jurisdiction and is the responsibility of the "wider Swedish society", the Armed Forces does have several organizations in place to assist returning veterans.
Simon reiterated helping ISIS fighters is not an issue for the Swedish military.
The Swedish defense and foreign ministries remained unavailable for comment on Wednesday.