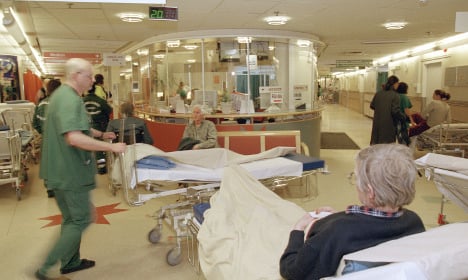 A Swedish hospital emergency room. Photo: TT
Swedish was once a health care model for the world. But that is hardly the case anymore.
This is not primarily due to the fact Sweden has become worse – rather it is the case that other countries have improved faster.
That Sweden no longer keeps up with those countries is largely due to its inability to reduce its patient waiting times, which are some of the worst in Europe, as the latest edition of the Euro Health Consumer Index (EHCI) revealed in Brussels on Monday.
The 2014 EHCI also confirms other big problems within Swedish healthcare.
Sweden's overall ranking dropped from eleventh to twelfth place – a steady decline since 2007, when Sweden was in sixth place. Sweden saw itself surpassed by all other Nordic countries, and its gap from the top is growing.
In the EHCI report, Sweden was given 761 out of 1,000 possible points, putting it between France and Portugal. The Netherlands maintained its top spot with 898 points, followed by Switzerland, Norway, Finland and Denmark.
These recent findings reveal that only Serbia and Ireland have waiting times as long as Sweden's.
Finland, which just a few years ago had very long waiting lists, was able to improve its access to medical care significantly, justifying its leap in the cross-European ranking. Why has Finland achieved this, but not Sweden?
It has long been tempting to excuse the Swedish move down the list on other countries improving much faster. But as the negative trend continues in Sweden, so is the growing sense of dread that serious deterioration is on the way. The seemingly chronic inability to do anything about our long waiting times affects Swedish quality of care in many other respects.
In recent years, we also noted gaps in cancer care, primarily in Stockholm County. It may be a matter of time before unreasonable waiting times and chaotic organization start to affect actual medical treatments. That long waiting times take a serious toll on patients' quality of life and social situations is well known.
Swedish patients have reacted to the poor availability of medical care by highly justified dissatisfaction. The official national guideline for the maximum waiting time to see a doctor in primary care in Sweden is seven days (ridiculously long compared to many other countries). Only Portugal has longer expected waiting times.
Current surveys suggest that the waiting time for family physicians and specialists in the Greater Stockholm area currently appears to be up to one month.
The county councils and the Swedish Association of Local Authorities and Regions' (SKL) excuses are well known: shortage of doctors, large migration to urban areas, nurses fleeing the profession, and so on.
But in reality, Sweden has no fewer doctors and other health professionals than most other countries in the study.
There is no relationship between money supply and availability. Albania, one of Europe's poorest countries, has no waiting time at all. And population movements and demographic changes are taking place all across Europe, not just in Sweden.
No, it seems that waiting times are a mental disorder inherent in the Swedish health care administration, rather than a resource issue. It would be interesting for behavioural researchers to perhaps study how within an empathetic profession such as child psychiatry, doctors can become accustomed to announcing to their young patients and relatives that the waiting time for an appointment is 18 months – a common timeframe in Sweden.
The question remains: What is preventing Sweden from taking a firm grip on its exuberant waiting times and making radical improvements? It hardly needs more investigation or more money – health care is not more expensive in countries with good accessibility. How long will queuing patients have to live with anxiety, pain and incapacity before Sweden's counties are able to honour their duties?
This is an abridged version of an article originally published in Swedish by Svenska Dagbladet.
Johan Hjertqvist is President of Health Consumer Powerhouse, a Swedish-based organization which compares healthcare systems around the world.