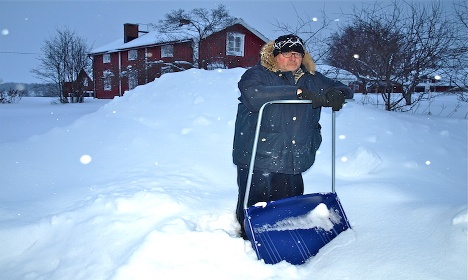 As the snow cascaded ceaselessly from the heavens over the weekend, one of my Swedish friends sent me a text message: “You said you wanted a proper winter, now you have a proper winter – be careful what you wish for.”

She was right. I had moaned and whinged last winter (as only Brits can) when the temperatures up here in my part of northern Sweden rarely dipped below -2C and were all too often above zero. I had certainly grizzled about the lack of snow – my snowmobile didn’t make it out of the barn last winter.

That will not be a problem this year.

You know the weather is unusually bad when hardy locals post pictures of mountains of snow on Facebook and send you messages asking if you’re okay and need any help getting out of the house.

In our village we have a man who makes everything tick. In the summer he’s out on one of his mechanical diggers, helping villagers with their building projects. In the winter he’s the man who clear the roads of excess snow. He also offers help clearing driveways of snow but I’ve never taken him up on that because, being a writer, snow-shovelling is the only real exercise I get during the winter. That was until last Saturday when our car got stuck in our drive, as we tried to set out to see friends. After some rather extreme driving I managed to bulldoze my way out of the drive but we stopped off to see Göran shortly after to ask him to clear our drive.

Our drive to and from our friends’ house was pure folly. The back roads were awash in the white stuff. Any stretch of open, flat road was almost impassable, as the snow fell and almost instantly drifted in the strong wind.

We made it back okay and settled in, waiting for storm to pass. Göran had ploughed our drive. On Sunday morning I went out and cleared the drive once more. I also cleared a path down to our woodshed, a distance of perhaps 30 metres.  But Sunday was the worst day of the storm. By 7pm, the snow in our driveway was more than a metre deep and the path to our wood store was obscured by a three metre drift.

We needed wood for our wood-burner so I plunged in with the snow-shovel. It was the hardest physical labour I’ve ever undertaken but, after two hours and three falls, we had wood for our burner. Then I had to dig out our car, because, on Monday, our twin girls had dagis and my girlfriend had a couple of meetings arranged in the local town. I’m still aching, three days later, from my exertions.

We called Göran again on Sunday night and he came out at 10pm to plough our driveway once more but by 7am the next morning, I needed to shovel snow again – the drive had a fresh coating of perhaps 25cm. But the girls made it to dagis and my partner Donna made it to her meetings. Life went on.

As I type this the snow is still falling but the worst is over. Our local newspaper received a record number of letters from readers praising strangers who had helped them out in the midst of the storm. The northern Swedish community spirit is still very strong in testing times.

And me, I’m looking forward to hauling the snowmobile out of the barn on Saturday for its first outing in nearly two years. I love snow. Honestly, I do.