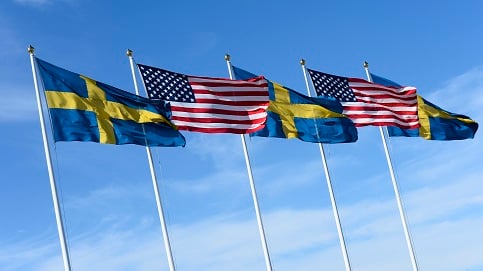 The government has announced it is launching an investigation into making Arlanda Airport the first airport in continental Europe to offer US border clearance on-site, enabling travellers to avoid chaotic customs situations upon arrival in the US.

“What this means is that all customs procedures would happen here in Sweden, so you would enter the US as a domestic passenger,” Jeff Anderson, Public Diplomacy Counselor at the US Embassy in Stockholm, told The Local on Thursday.

“So flights could potentially land at different airports than they do now, and passengers could proceed directly to connecting flights or exit the airport immediately after collecting baggage.”

Swedavia, which operates all airports in Sweden, sent a letter of interest to the US last year. The proposal must now be approved by both Swedish and American authorities.

“The US government will now engage in a process to assess all of the applicant airports, and then decide which airports to begin formal negotiations with,” Anderson explained.

But the outlook is positive, and Minister of Enterprise Mikael Damberg has already expressed his approval.

"Introducing preclearance at Arlanda would save time and money for both American and Swedish companies," the minister said in a statement, adding that the government wanted to work ‘quickly’ with getting the proposal approved.

“This will serve to facilitate and enhance commercial relations with the United States, and will be better for both Americans and Swedish travellers to the States, whether for commercial purposes or leisure,” Dahlen told The Local.

“It will burnish the Stockholm brand as a leading international city and business hub.” Sweden would become only the second nation in the EU with such a system, after Ireland, which has US preclearance at airports in Dublin and Shannon.

“Sweden is already the biggest market in Scandinavia, and Stockholm has the highest numbers of international headquarters in Scandinavia,” Swedavia's CEO Torborg Chetkovich told The Local on Thursday.

“And there is a lot of business between the US and Sweden, for example the IT cluster, so this will improve the potential for our export industries.”

Chetkovich noted that the CBP (US Customs and Border Protection) has not yet approved the proposal, and is expected to make a decision this spring. But Swedavia says it is already fully prepared for any change.

“We have been looking into the possibility for years, and have been working on the plans for quite some time,” she said. “The important thing is that we have a decision from the Swedish government and everyone will work full-speed ahead to make this happen as quickly as possible.”

With more than 22 million passengers in 2014, Arlanda is by far Sweden's largest airport, and the third largest airport in the Nordic countries. Dublin Airport increased its air traffic by 10 percent thanks to preclearance operations, and the effect on Stockholm may be similar.

”Having a preclearance facility in Sweden would present tremendous opportunity to further deepen commercial links as well as people-to-people ties between Sweden and the United States,” Anderson told The Local.  “Travel between the two countries will definitely increase.”

Arlanda's passenger traffic increased by 10 percent between 2013 and 2014 – numbers which only Brussels, Lisboa, and Athens airports beat in all of Europe.

“Stockholm Arlanda Airport has been one of the fastest growing airports in Europe for the last three years,” Chetkovich confirmed, “and it’s still growing.”

The proposal is just one part of Swedavia's 13 billion kronor development plan for Stockholm Arlanda Airport, which aims to improve Swedish connectivity and meet the growing demand for links to other countries.

“This is an extremely important piece of our work to strengthen direct intercontinental traffic to Sweden,” Chetkovich said.

“In addition to making travel much easier, this should also open new routes to the US. There is a lot of work left to be done, but this decision is an important step in the right direction.”