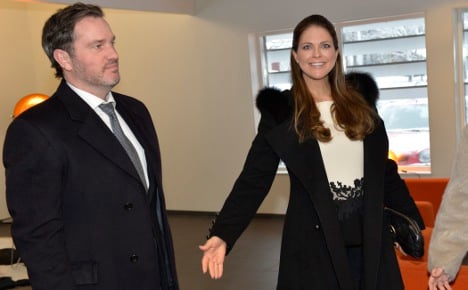 He writes: "The Princess systematically refuses to allow time for media interviews and questions. (…) To constantly avoid interviews is not in line with Swedish democracy nor in line with what the Royal Court claims to be: a modern monarchy."

"Waving and smiling is not enough and seeing yourself as above democracy and openness is incomprehensible."

Princess Madeleine is the Duchess of Hälsingland and Gästrikland, where Gävle is located.

Margareta Thorgren, Royal Court press officer, told Swedish Radio News on Thursday morning: "These kinds of visits are preceded by extensive planning and the schedule is busy. She did answer some of the journalists' questions, even though we were clear about the fact that this was not a media opportunity. We try to be as open as we can, but of course we have listened to the criticism."

She added that the princess had expressed surprise at the letter. She said: "Our royal family is very open compared to other royal families in Europe. But of course there are areas in which we can improve."

Eriksson told The Local he hoped his letter would push the royal family to work towards increased transparency.

"There are very few people in Swedish society who are above all scrutiny and it is important that the royal family isn't either," he said.

The Local contacted the Royal Court on Thursday morning, as well as on several occasions over the past few months, but has yet to receive any replies.

Princess Madeleine's reluctance to answer questions follows a number of scandals involving her and her husband in recent weeks. In January The Local reported that Princess Madeleine's husband Chris O'Neill was chased for unpaid taxes and debts of almost 350,000 kronor ($43,030) in New York. The British-American banker later explained he had been the victim of identity theft.

The pair returned to Sweden in December, after having lived together in New York, saying that they wanted time to decide on where in Europe to base themselves in the future.

Princess Madeleine is set to give birth to her second child later this year and told Swedish media in 2014 that she no longer wanted to live so far away from her relatives in Stockholm.