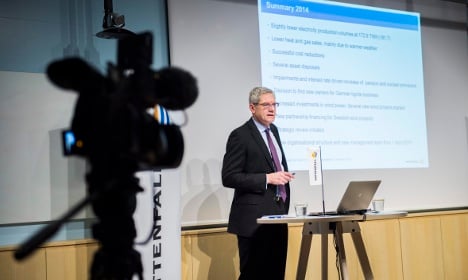 The state-owned company, a major provider of electricity in northern Europe, reported a net loss of 8.18 billion kronor ($990 million, 871 million euros) in 2014 which was an improvement on the 13.67 billion-kronor-loss the year before.

Sales fell by four percent to 165.94 billion kronor, largely as a result of the company being forced to sell its controlling stake in the power grid of Hamburg, Germany, following a local referendum.

"2014 was an eventful and challenging year that was characterised by weak demand, a surplus of production capacity and falling electricity prices," chief executive Magnus Hall said in a statement.

He added that the losses were partly offset by 13.7 billion kronor in cost cuts compared with the cost base in 2010.

Vattenfall was further hit by asset write-down charges worth 23.8 billion kronor, which Hall said were "the main explanation for the year's negative result".

They have also been caught out by the US shale energy boom which has pushed down the price of coal for power generation, undermining the profitability of new gas-powered plants and some investment programmes.

Electricity prices fell last year by an average of 22 percent in the Nordic countries and by 13 percent in Germany.

"Unfortunately this is the market we will be seeing in the next two-three years. I don't think it is possible to believe anything else right now," Hall said at a press conference in Stockholm.