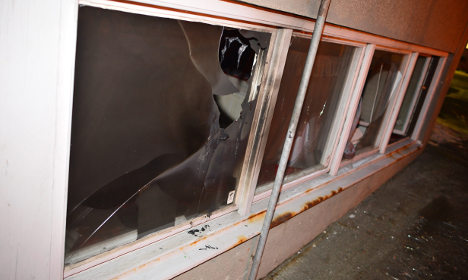 Two bottles containing flammable liquid were thrown into the building. Police were called to the scene at 12.45am on Friday.

“One of the bottles started to burn and a person who was in the property at the time managed to put out the fire,” Peter Martin of the regional police told news agency TT.

The ambulance service attended to the man, who is reported to have suffered no injuries. The blaze was out when the fire service arrived at the scene.

The attack comes as the Swedish Commission against Antiziganism is set to present their first report on Friday. The commission was appointed by then integration minister Erik Ullenhag a year ago to collect facts about Roma discrimination and suggest improvements to tackle the issue.

Commission chairman Thomas Hammarberg accused the Swedish system of failing to aid Roma groups in an interview with Swedish Radio on Friday.

“Unfortunately there is a general feeling amongst many Roma people that you should avoid telling people of your ethnicity, that you belong to the Roma group in Swedish society. That is a signal we have to take seriously,” he said.

He added: “It has to be possible to complain when one is being discriminated against. And measures have to be taken. Our Swedish system does not work well in that respect. And unfortunately a lot of Roma people no longer believe that the system works. The trust has gone, and that needs to be corrected.”

Hammarberg and the eight other members of the commission are set to present their first report at a press conference on Friday morning.

The arson attack in Malmö is still being investigated by police, but it follows several other attacks against minority groups across Sweden, including antisemitic crimes and attacks against mosques, prompting the UN to issue sharp criticism of the country, as The Local reported earlier this year.

One of the Commission against Antiziganism's suggestions is to set up a national antiziganism institution designed to protect Roma rights.