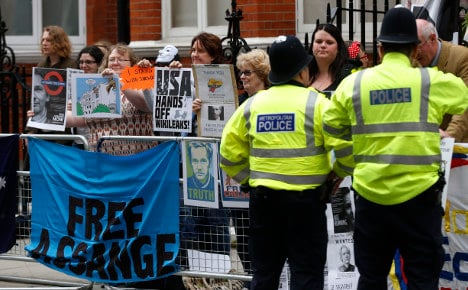 Police monitor Assange's supporters at a rally in June 2014. Photo: TT
Police in London have confirmed that the Australian cost UK taxpayers 113 million kronor between June 2012 and October 2014, with current daily costs of around 13,000 kronor expected to have pushed up the total spending to 125 million kronor.
The figures were obtained by London radio station LBC under the UK's Freedom of Information Act.
In response, the UK's Deputy Prime Minister Nick Clegg said Assange should "face justice" and spoke of a "frustrating situation" for both the British taxpayer and the Swedish government, during his weekly radio phone-in on LBC.
Julian Assange is wanted over rape and sexual assault claims made by two women in Sweden in 2010.
He has been holed up in Ecuador's embassy for two years to avoid extradition to Stockholm.
A spokesperson for Wikileaks, Kristinn Hrafnsson said: "It is embarrassing to see the UK government spending more on surveillance and detaining an uncharged political
refugee than on its investigation into the Iraq war, which killed hundreds of thousands."
The site also posted a message saying the cost of the security could have paid the salary of 459 school teachers.
TIMELINE: Julian Assange sex claims
Julian Assange has long argued that extradition to Sweden could lead to him being transferred to the United States to face trial over Wikileaks' publication of classified US military and diplomatic documents. In 2010, Wikileaks began publishing 250,000 American diplomatic cables and 500,000 classified military reports, covering both American diplomacy and the US wars in Iraq and Afghanistan.
Assange has called on Swedish prosecutors to travel to London to question him over the rape allegations or alternatively to do so by video link, but they have repeatedly rejected the demand on the grounds that it was not normal legal practice.
The Wikileaks founder is continuing to fight his extradition to Sweden. On November 20th a Stockholm appeal court upheld his arrest order, but Assange's lawyer told The Local there was now a plan to take the case to Sweden's Supreme Court.