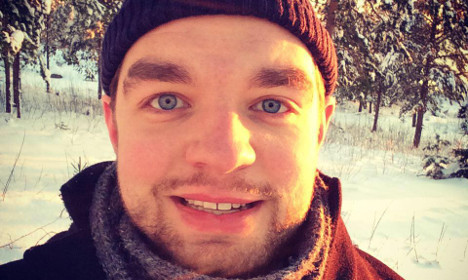 Johan Nylander's post about a woman running when she saw him has gone viral. Photo: Private
Nursing student Johan Nylander parked his car in the suburb of Hägersten late on Monday night before cutting through a small forest to get to his apartment.
He documented what happened next on his Facebook page: "I saw a girl walking on the path I was heading towards. The moment she saw me she ran. She didn’t say anything, she just ran. I was stunned and just wanted to run after her and shout that she didn’t have to be afraid of me. But I know it wouldn’t have helped. There was nothing I could do."
The rest of the post read: "I first felt really stupid that I made a girl so scared and shocked that she ran as soon as she saw me. But now I just feel sad. I feel so bloody sad that we have reached the point where girls run as soon as they see a man walking towards them. It’s completely f**king insane. Don’t get me wrong, I understand that she ran, I would probably have done the same had I been in her situation. But THAT she should have to run, there are no words to explain how sad that makes me. Together we have to make sure future generations of girls don’t have to run. You’re done running now. Us men need to take our bloody responsibility to make sure that no one has to run any more. I hope that all you other men who read this are with me and will help make this a reality."
By Friday his rant had been shared thousands of times and was one of the most talked-about issues on social media across Sweden.
"I hope that people will heed this man's call. For my daughter's sake. And for my son's. And for my own," said one commenter Elisabeth Ökvist on Facebook.
Linda Olsson, another commenter wrote: "The first time a man doesn't turn this into how sad it made HIM and how unfortunate it is for HIM that girls live in a constant fear of rape. (…) Imagine what it is like to always be frightened as soon as you're out walking on your own or when it gets dark."
"Of course I am honoured to get this kind of reaction from everyone around me, but in another way it makes me sad that it took a white male guy to make this debate happen in Sweden on an issue that millions of women have been talking about for ages," Johan Nylander told The Local.
"I don't know if the woman was thinking I was going to attack her but the fact that she ran suggests she was scared of men in general."
The debate may seem like an unlikely one in Sweden, a country famous for gender equality and tolerance as well as low crime levels.
But there have been a number of high profile sex attacks in recent years. In 2013 there were almost 1,600 cases of sexual assault involving under-18s in Stockholm alone.
Earlier this week eight Swedish men were arrested over an alleged gang rape on a ferry heading from Stockholm to Finland.
"Are we really that gender equal?" questioned Nylander on Friday.
"I'm not quite sure. I have seen us sliding down some of those international lists. Debates about women's rights in Sweden are bubbling. It was a big issue before the last election as the Feminist party campaigned for votes and we need to keep people talking about this," he told The Local.
Asked how he felt the problem should be tackled by politicians and other officials he said: "There are people wiser than me who have better thoughts about this. But my hope is that men will start to think about how they behave and how they think and to change the way they act."
Despite the national stir, figures suggest that men are still far more likely to be attacked in Sweden than women.
Figures from the Swedish Prime Prevention Council show that 2.6 percent of men in Sweden reported being assaulted in 2012, compared to 1.3 percent of women.