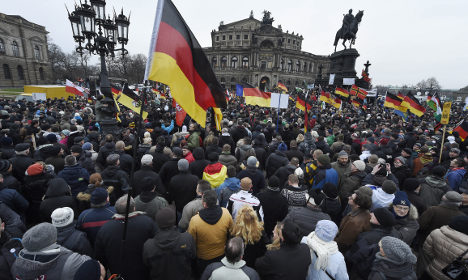 Germany-based anti-Islam group Pegida plans to hold a demonstration on the Stortorget square in Malmö in southern Sweden on Monday.

But as the rally gets underway, the bells of St Petri Church are set to ring to call people to a special service in support of a multi-cultural society.

Malmö parish vicar Anders Ekhem told The Local on Friday: “During the manifestation, the Swedish Church is going to hold a service where we express joy for our city and our muslim friends.”

“There is strong support for diverse cultures in Malmö and it is important that the church is there to support that.”

He does not want to call it a demonstration in response to the Pegida march, but adds it is important to the church to protect a democratic and religiously diverse society.

“You can choose to stay silent and let them give a voice to something you don’t accept. Or, we can choose to show what we believe in, which is a multi-religious society where everyone is given the freedom to preach their own religions,” he said.

Pegida marches – which have voiced anger against Islam and “criminal asylum seekers” – began in Germany with a few hundred supporters when the owner of public relations firm Lutz Bachmann started a Facebook group in Dresden in October. They have grown steadily since then, drawing a record 25,000 people on January 12th just after the Charlie Hebdo attacks in Paris.

Professor Dr. Werner J. Patzelt from the Technische Universität in Dresden told The Local Germany earlier this year that Pegida members claim their freedoms are being diminished by radical Islam. He said: "In Germany, we have a shift of the political discourse to the left compared with the distribution of political opinions among the population and for a long while, it has been not impossible but quite difficult to express so-called right-wing political sentiments in public."

The German branch’s 19-point manifesto released in December 2014 calls for stricter immigration and asylum laws as well as making integration part of the constitution. It also calls for the outright rejection of any immigrant, refugee or asylum seeker with a criminal background.

But their response in Scandinavia, with marches held in Denmark as well as Norway, has thus far been lukewarm. Only 70 people showed up to a rally held in Norway earlier this year, with the group far outnumbered my counter-demonstrators.

Former gallery owner Henrik Rönnquist, who is behind Monday's Malmö march, told local newspaper Sydsvenskan: "We expect at least 200 people to attend, but maybe as many as a couple of thousands. But there will probably be more counter-demonstrators."