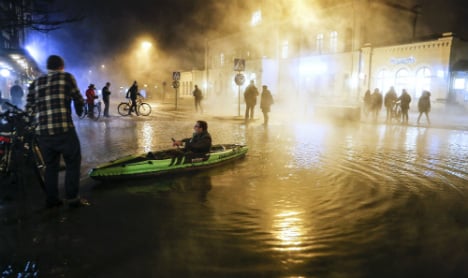 Large quantities of hot water gushed out of the burst pipe onto Sankt Laurentiigatan in the centre of the university city at around 6pm on Friday evening. According to the emergency services the source of the leak was a fractured district heating pipe.

The water caused a cloud of hot steam and which cloaked the street, reducing visibility to a minimum.

Police were informed about the bus accident at around 7.15pm. A witness reported how the bus lurched down the street out of control with sparks flying from underneath, apparently from a mangled bicycle.

"When you see a bus approaching careering in that manner and hear people screaming and see somebody lying in one place and someone lying in another, then it all becomes rather overwhelming," he said.

Nils Norling reported at 10pm that the police had been unable to ascertain the precise reason for why the bus lost control and while media reports have inked the accident to the gushing hot water and steam, the connection has not been confirmed.

It has been confirmed that one man died and that a further seven people have been treated for minor injuries at Skåne University Hospital.

Police cordoned off an area around Fredsgatan to Bantorget during the evening. Local residents were seen using wooden pallets to walk precariously down the flooded streets to avoid the risk of burning themselves.

"I don't know what I can say. It is totally crazy. There is water everywhere. It's unreal," witness Lina Aspegren told the TT news agency.