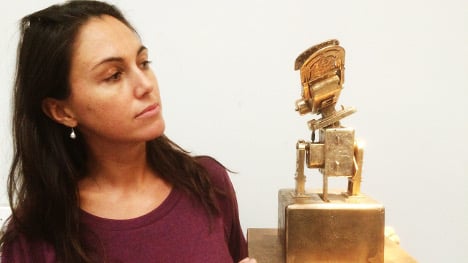 Tove Kjellmark with her robot. Photo: The Local
Perched on a plinth in the railway station’s main entrance hall, Tove Kjellmark’s robot catches the eyes and ears of everyone who passes.
Article continues below the video.
But the artist’s cute creation is not just some attention-grabbing gimmick, she explains.
”The sculpture’s title is Alone Together. It communicates what people in Stockholm talk about every day by capturing geo-tagged tweets live and reading them out loud at random.”
The piece should make people think about the kind of things they put into the public arena, she says.
With issues surrounding freedom of speech and censorship in the news after the Charlie Hebdo attacks in Paris, the work's unpredictability can seem threatening. What if it starts spouting hate speech? Kjellmark says she has added some filters, but they can't catch everything.
The artist says the people she talks to about the piece tell her how conscious it makes them of just how public their online presences are.
”It also raises questions about integrity and how easy it is to hack into open networks.”
Kjellmark routinely collects toys and machines that she then hacks into for her own purposes.
”I strip them down and see what they look like inside and sometimes enlarge them.”
That’s exactly what she did with Alone Together, building a moving bronze sculpture around the framework of a talking toy bulldog she bought in Barcelona.
The artwork is also intended to subvert typical monumental art, she says. Bronze as a material tends to be the preserve of heroic and serious men. Kjellmark toys with that masculine ideal by giving her playful sculpture a woman’s text-to-speech voice.
”It’s a kind of exorcism of these old statues of kings on their horses,” she says.
The decision to locate the sculpture in a place where 250,000 commuters pass daily was hers. The artwork’s private sponsors, The Absolut Company, helped make it happen, donating it to the station's owner, Jernhusen.
”People are sitting here waiting for trains. They have time to listen.”
Kjellmark says that while the general public has responded warmly to her work, Swedish art critics have stayed silent.
”I think the Swedish art world is quite technophobic, which is a pity.
”I think they are a little bit afraid of these kind of art pieces. We’ll see if they dare to say anything about it. Anything you don’t know so much about can be frightening.”
Tove Kjellmark is currently also exhibiting at the Royal British Society of Sculptors in London. Find out more about her work at her website.
Post-script: The sculpture was vandalized after we met the artist and is temporarily out of action but she is working to get it up and running again quickly, possibly surrounded by an oversized birdcage.
"People of all ages were interested, many charmed, some confused, others delighted. And then someone decided to break it," she says.