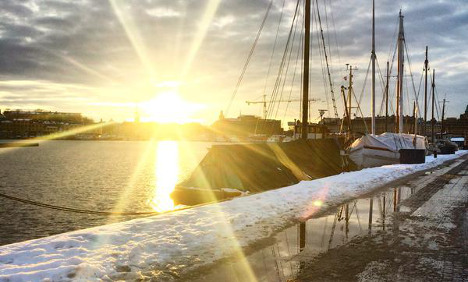 Gothenburg on February 9th. Photo: Linnea Wiklund/Twitter
Meteorologists recorded the highest February temperature in west Sweden since records began in 1859 on Monday, citing a warm air mass from Africa giving Gothenburg a big cosy hug.
By Tuesday afternoon temperatures in the city had dipped to around 8C, but remained much higher than the 1C average for the region at this time of year.
"An air mass came from Africa and reached all the way up here," Alexandra Ohlsson, a meteorologist at Swedish weather agency SMHI told the newswire TT.
She added that temperatures of around 10C were set to reach large parts of southern Sweden on Tuesday: "It looks as if the Kalmar region and the inner parts of Halland and Sjuhärad are conveniently located for getting sunny and warm."
Northern Sweden is also experiencing milder than usual weather for this time of the year, with Norrbotten the only area where temperatures were below freezing on Monday.
"Temperatures have been above normal…It's not often we have such high temperatures in mid-February," added Ohlsson.
Instagram and Twitter filled up with photos of Gothenburg residents sharing their sunny experiences on Monday, just days after thick snow engulfed the city.

A perfect day in #Gothenburg for a walk in the warm sun ☀️ Photo: http://t.co/1BnLRxCf7Q pic.twitter.com/PV62lUK2yp

But forecasters believe that temperatures will drop back to below 5C in the south and west of the country by the end of the week, while northern Sweden can expect plenty of ice and a return to below freezing temperatures.
This is because colder air is expected to sweep down from the Artic, displacing the milder winds from Africa.
Check the weather forecast from your corner of Sweden
The highest temperature recorded in Sweden in February is 16.5C. The village of Ölvingstorp in south east Sweden scored the sunshine back in 1961.
Soderhamn in northern Sweden managed to reach 14.3C in Febuary 1990, while the warmest weather in Svealand in central Sweden was in February 2012, when temperatures jumped to 15.7C.