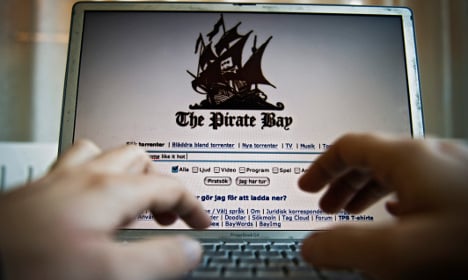 A pilot case in the Pirate Bay row is set for court this spring. Photo: Marc Femenia/SCANPIX

Prosecutor Fredrik Ingblad has requested that foundation Punkt SE, which controls all (.se) domains, forbid anyone from using the domains piratebay.se and thepiratebay.se.

“A domain name assists a website. If the site is used for criminal purposes the domain name is a criminal instrument,” Ingblad told Swedish newspaper Dagens Nyheter.

The Pirate Bay, which grew into an international phenomenon after it was founded in Sweden in 2003, allows users to dodge copyright fees and share music, film and other files using bit torrent technology, or peer-to-peer links offered on the site – resulting in huge profit loss for music and movie makers.

In December, The Local France reported that a French court had ordered France's leading internet operators to block all clients to try to access the file-sharing website from within France.

While not the first time a Swedish court is set to rule on the forfeiture of domain names, in this pilot case the demands are for the first time not directed at the owner of the site, but at the institution responsible for the complete top domain register. If Stockholm District Court rules in favour, Punkt SE will be forced to prevent anyone from registering the domain names, alternatively handing over the ownership to the government of Sweden.

Punkt SE CEO Danny Aerts has criticized the proposal, likening it to removing all street signs from properties that have ever been the scene of a crime.

“We view ourselves as an important part of the internet, as a register keeper. But we have nothing to do with the content,” Punkt SE lawyer Elisabeth Ekstrand told Dagens Nyheter.

In 2012 Pirate Bay was the largest file sharing site in the world, with two billion page views a month. Three of its founders where sentenced to jail in 2010 and told to pay damages amounting to around 46 million kronor ($5.5 million).