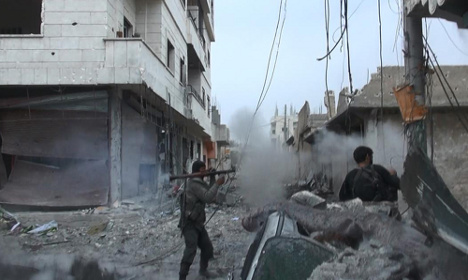 A picture posted by the Islamic State group of fighting in the town of Kobani, Syria. Photo: AP Photo/Raqqa Media Office

The civil war in Syria has led to more than three million people fleeing their country. As there is no legal way for the refugees to get here they are forced to rely on human smugglers. This has created a large black market controlled by organized crime.

People smuggling from Syria to Sweden turned over billions of kronor in 2014. Last year 30,583 Syrians and 7863 stateless citizens (most of whom are from Syria) sought asylum in Sweden. The average price for the journey to Sweden is estimated at close to 150,000 kronor ($18,000) per person. Crime syndicates with branches within the EU, and in Sweden, control this billion kronor industry.

These 'entrepreneurs' hardly care for the wellbeing of their 'customers'. According to the International Organization for Migration (IOM) more than 3000 migrants died trying to cross the Mediterranean Sea between January and September last year.

24 percent of all seaborne refugees found during the first half of 2014 were Syrians, according to the European Union's border security agency Frontex. If one extrapolates from IOM's and Frontex's figures one can assume that around 1000 of those who died during their attempts to cross the Mediterranean Sea in 2014 were Syrians.

As almost one-third of Syrian asylum seekers in the EU make their way to Sweden, one might also assume that around 300 of those who died in the Mediterranean last year had Sweden as their final destination. This means that for every 100 Syrian asylum seekers received in Sweden, approximately one died on the way here.

For the syndicates behind the human trafficking the desperation of the 'customers' can be an advantage. Those who cannot afford to pay for the whole journey are sometimes forced into organized crime to pay their way. According to the police it could involve things such as smuggling narcotics en route or carrying out 'criminal dirty work' once they arrive in Sweden. The fact that the refugees often have families left in their home country can make it difficult to oppose the crime syndicates' orders.

Other than having contributed to a criminal billion kronor industry, the extreme pressure of the Syrian wave of refugees also poses a political risk. The brutal terror organization IS is thought to control about one-third of Syrian territory, and thousands of extremists from Europe and other parts of the world have travelled there to participate in jihad and are being trained by terror groups. This means that the massive infrastructure built to enable human smuggling can also be used by al-Qaida inspired terrorists wanting to find a way into Europe. BuzzFeed News recently interviewed an IS operative who claimed that the organization had smuggled terrorists into Europe, and Sweden specifically. In the same article two US senators confirmed that human smugglers had been used to bring IS fighters into the EU.

The unprecedented number of refugees – the number of asylum applications from all corners of the world in 2014 corresponds to one percent of the population of Sweden – means that the Swedish Migration Board (Migrationsverket) is under strain. The state therefore has limited resources to scrutinize individual cases from Syria. There is a danger that security risks go unidentified. Moreover, those perceived as potential threats cannot be expelled due to the ongoing civil war in Syria. Last year over 20 asylum seekers were identified as having seriously harmed others or being members of terrorist organisations.

Looking back at previous conflicts, such as in the area formerly known as Yugoslavia, illegal trade was an important source of income to the warring parties. Even today, 15 years after the war, a large proportion of illegal weapons found in Sweden come from that region.

The great number of weapons and the growing narcotics trade in Syria may have consequences reaching all the way to Sweden. A growing Syrian diaspora in Sweden, the crime syndicates' abuse of refugees, and returning combatants (often with a criminal past) create perfect conditions for illegal flows between Sweden and one of the world's worst conflict zones.

In spite of Damascus being more than 3000 kilometres from Stockholm, the war in Syria could end up affecting Sweden more than any other conflict since the Second World War. It is therefore essential to investigate and counter the potential threats this could bring.

There is no quick fix or 'magic bullet' to address the security challenges posed by human smuggling into Sweden. Syria is in chaos. Libya, one of the key transhipment points used by the smugglers, is also suffering from conflict and lacks an effective central government. Mediterranean Europe, through where most of the refugees are smuggled into the EU, encompasses a huge coastline and is riddled with corruption. Southern Italy, one of the most important entry points into the EU, is under the control of powerful organized crime groups that have vested interests in this lucrative trade.

There are however some measures that Swedish authorities could take to reduce the loss of human life and income for organized crime that the extensive human smuggling into Sweden generates:

In the longer run it will also be important to systematically identify best practices that have successfully reduced human smuggling to other countries, so that the most effective solutions can be implemented by Swedish and European authorities.

None of these efforts will be sufficient to eliminate the human suffering caused by human smuggling. But to do nothing is not an option. We can no longer afford to ignore a criminal mass industry that undermines our border security, whilst turning over billions of kronor and killing hundreds of refugees in the process.

Karl Lallerstedt is Co-founder of Black Market Watch and programme director of illegal trade, economic and financial crime at the Global Initiative Against Transnational Organised Crime. For a more thorough analysis of the other threats posed to Sweden by the conflict in Syria, read his report "Syria and Sweden – a distant conflict with serious consequences at home", published by the Stockholm Free World Forum.

To limit the overwhelming burden on our moderators, it will not be possible to comment on this article. Feel free to join the conversation on our Facebook page.