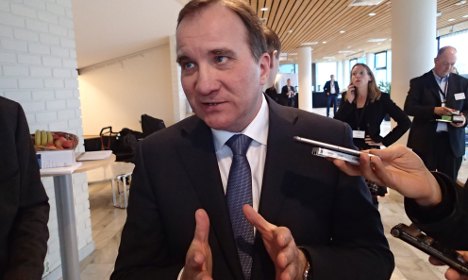 Swedish Prime Minister Stefan Löfven has criticized Russia. Photo: Lars Larsson/TT
"We welcome diplomatic efforts, there is no military solution," Löfven told the Swedish parliament's EU committee on Wednesday afternoon.
Löfven claimed Russia was responsible for enabling heightened tensions in eastern Ukraine, according to news agency TT, and said Sweden supported tightened EU sanctions over Russia's actions.
Sweden's Foreign Minister Margot Wallström reveals new foreign policy strategy
Opposition Christian Democrat MP Désirée Pethrus was among those who welcomed the move.
"It is good if the Prime Minister is clear on Russia," she told TT.
Löfven also told Swedish newspaper Expressen that he had spoken to the president of Ukraine, Petro Porosjenko, on Tuesday and said he was planning a visit to the country.
"We talked for some time and he described the suffering of the people of Ukraine. We agreed that it would be good if he was to participate in the summit in Brussels tomorrow. We also talked about the visit I plan to make to Ukraine in a not too distant future," he said, adding that military support for the region was not on the table.
European leaders are set to meet in Brussels on Thursday to discuss the fight against terrorism in the wake of the Paris attacks, the latest developments in Ukraine and the strenghtening of economic coordination.
The Local reported on Tuesday that Swedish defence and security group Saab forecast stronger arms sales and rising profits, partly in response to the conflict in eastern Ukraine.
"Defence budgets, which have declined in the United States and Western Europe during the past couple of years, are expected to increase in the coming years," the group's chief executive Haakan Buskhe said in a statement.
He added: "One thing that drives all of this is of course the increase of defence spending in Russia."
Relations between Sweden and Russia have been under strain since last summer's infamous submarine hunt in Stockholm's archipelago. The Local reported last month that Sweden's armed forces estimate as many as four submarines were operating in the area at the time.