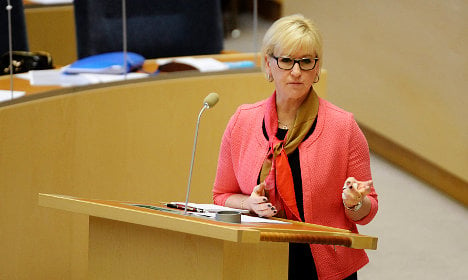 “We live in a community of co-dependence, and we do so in a time of greater uncertainty,” said Wallström.

“State aggression in the east and state collapse in the south have repercussions for Sweden. This leads to tensions in our vicinity, flows of refugees, and a growing proportion of our population with painful memories of war and conflict.”

But Wallström, who has made much of a new feminist foreign policy, faced fierce criticism from Hans Linde of the Left Party for Sweden's continued arms sales to Saudi Arabia.

”It’s a military co-operation agreement with one of the countries in the world that most clearly and systematically violates women’s rights,” said Linde.

In her speech, Wallström said Sweden’s EU membership had made its voice more powerful. She also welcomed the fact that EU countries had stayed united in their response to developments in Russia and Ukraine.

“Sweden will continue to pursue policies that are clear in their demand that international law be respected and that every country has the right to decide its own future.”

Wallström said the United Nations had a key role to play in ensuring peace and security.

“It is completely central at the global level, which is why the UN needs to be strengthened, and its place will now be reinstated in Swedish security policy.”

Sweden intended to take part in more UN missions, said the foreign minister, who also spoke about Sweden’s candidacy for a place on the UN Security Council in 2017-2018.

The government would not stray from the country’s recent policy of pledging to act in the event of an attack on another EU or Nordic country, she added.

“We expect that these countries would act in the same way if Sweden were affected,” she said.

Wallström also argued that human rights safeguards would serve as a cornerstone of Swedish foreign policy.

“Genocide, crimes against humanity, war crimes and other serious violations of international law will be fought and punished.”

She said that Sweden would seek to combat different forms of forced labour and child labour and would defend people’s right to form trade unions.