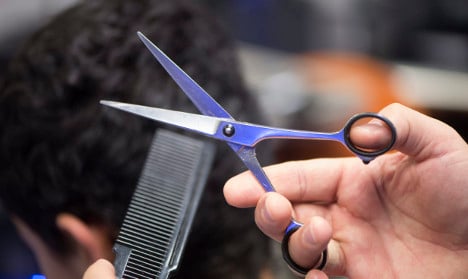 A hairdressers in Stockholm. Photo: TT
One in five people (20 percent) employed in Sweden's hair and beauty industry was born abroad, show figures released on Thursday by the country's official statistics agency Statistics Sweden.
The next most common professions were office and hotel cleaners, nurses and ward assistants in hospitals, restaurant staff and child care workers. Working as a medical doctor was the sixth most regular occupation.
Five snappy barber shops in Stockholm
Researchers found that 14 percent of the total Swedish labour market (employees aged 16-64 for whom data was available) in 2013 was made up of people born elsewhere.
Separate figures released by Statistics Sweden on Thursday demonstrated an overall rise in employment among immigrants.
In January 2015, 4,717,000 people aged 15-74 were employed in Sweden, an increase of 98,000 persons compared to January 2014.
Researchers concluded that the increase was "mainly due to a rise in employment among foreign born persons", with this figure increasing by 81,000.
While the study demonstrated that immigrants in Sweden still tend to be more likely to be employed in unskilled jobs than professional roles, it follows figures released by Sweden's Employment Service (Arbetsförmedlingen) in November 2014 which suggest it is getting easier for foreign-born graduates to find a job in Sweden.
The service reported that 71 per cent of graduates born outside of Europe and living in Sweden were working in 2013, compared to just 58 percent in 2005.
Linda Pärlemo, the lead analyst behind the study told The Local she was "surprised" by the figures, which emerged as Sweden was experiencing both slow economic growth and its highest level of immigration for decades – both of which have continued into 2015.
"On the whole it is becoming easier for those who are academically trained to get a job – even if they were born outside of Sweden. But the gap between domestic and foreign-born graduates is still large," said Pärlemo.