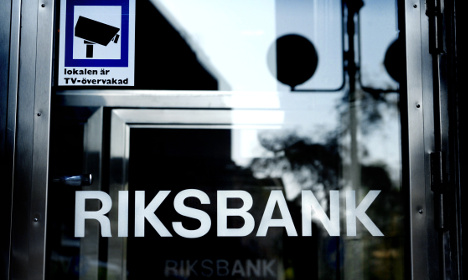 Sweden's Riksbank in Stockholm. Photo: TT
In a statement, it said that the reason for the move was continuing low inflation.
"The recovery in the world as a whole is expected to continue in the coming years, although it is slow. Since December, however, the risks of weaker growth abroad have increased. Oil prices have fallen, which is positive for global growth, but it will also lead to low global inflation," the bank said.
It is the first time that there has been a negative interest rate in Sweden.
Negative rates work differently to positive interest ones when borrowers usually pay money lenders an interest rate, usually an annual percentage on the total amount of money borrowed. Savers putting money into a bank can normally expect to earn interest on that cash.
When interest rates are negative, this relationship is reversed, so lenders – i.e. banks – have to pay to lend money or to make an investment.
The basic idea behind negative rates is to stop organisations or people from making risky investments or transactions that could impact on the wider economy.
The Riksbank hopes that by lowering the interest rate, this will help boost inflation and increase the country's money supply. By allowing companies to borrow money very cheaply it is hoped that this will lead to increased production and higher inflation, while further reducing unemployment in Sweden, which currently stands at 7.8 percent.
It previously lowered rates from 0.25 percent to what was then a record low of zero percent in October 2014, stating that while the Swedish economy was "relatively strong" and economic activity was continuing to improve, inflation was not happening quickly enough.
The latest move is likely to affect banking customers who may find banks seeking to reduce their costs in other areas to make up for low interest rates, such as by further lowering interest rates on savings accounts.

"The banks… will try to make up for it somehow," one financial expert Annika Creutzer told Swedish broadcaster SVT on Thursday.

"Probably they will not lower mortgage rates as much as the repo rate is being lowered. But it could affect the interest rate on savings accounts, which will probably be very low, if they offer any interest at all."

The krona depreciated sharply against both the euro, the pound and the dollar after the latest announcement.
For Swedes and foreigners living in Sweden drawing a salary in kronor, this means that your money won't go as far if you visit the US or other European countries, but it could be the best time to invite friends from those places to visit as Sweden won't seem so expensive for them and their holiday money will go further.