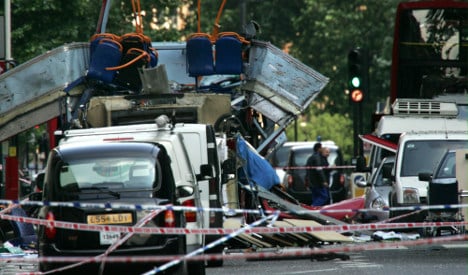 The 2005 terror attacks in London involved homemade bombs. Photo: San Tang/TT
In a forest in Södertorn, south of Stockholm, a seven-acre facility belonging to the Swedish Defence Agency is working on a project designed to prevent people from being able to make bombs from household products sold around Europe.
The idea is to identify how to replace substances that can be used to make explosives, with other ingredients that are not potentially dangerous and still allow products to fulfil the purpose they were invented for, for example cleaning or bleaching.
The project, which is funded by the EU, is looking at items including camping stoves, detergents and disinfectants.
"It's about how we can prevent anyone from making bombs from things that can be bought in stores," Henric Östmark, research director at the Swedish Defence Research Agency told the Swedish newspaper Dagens Nyheter.
But he refused to go into too much detail to ensure that knowledge being gathered by the research team did not end up in the wrong hands.
Paris attacks: Knock-on effects across Europe
The EU has already made it illegal to own certain substances that can be used to make bombs and it is hoped that the Swedish project will lead to further legislation once replacable bomb-making ingredients within other household products have been identified.
Swedish researchers are also developing new methods to help detect homemade bombs. This includes sensors that can be mounted on the roofs of police cars or in scanning areas at airports or even sewers, where suspicious particles from bombs could spread.
It is believed that this kind of technology could have been used to detect the explosives used in the London bombings in 2005.
"We are now in discussions with the European Commission to develop a prototype [of a sensor] that could be tested when the police anywhere in Europe receive an indication that something like this going on," Östmark told The Local.
The Local talks extremism with Sweden's Interior Minister Anders Ygeman
Details of the project emerged as terrorism was a key topic on the agenda for European leaders meeting for their latest in summit in Brussels on Thursday, in the wake of the terror attacks in Paris last month.
In 2011, Norway was rocked by a bombing attack in Oslo carried out by Anders Behring Breivik, who went on to shoot dozens of young people who were at a youth conference on a nearby island.
Sweden has also experienced homegrown terrorism in recent years, with a suicide bombing in central Stockholm in 2010.
Asked about the possibility of future terror attacks in the Nordic nation last month, Sweden's Interior Minister Anders Ygeman told The Local: "We must not let the dark forces win. I can understand why people are concerned, but we are doing everything we can to prevent actions like these. We should not be afraid and we should not be silenced."